Stars Support the Love Can Initiative

Ridgefield, CT -- (SBWIRE) -- 10/10/2013 -- Hollywood stars join the Love Can Initiative to support their mission to provide the basic necessities of life for low-income families and their children.

Gloria Loring supports the Love Can Initiative. She is the recording artist of the #1 hit song Friends and Lovers; co-composer of television theme songs Diff’rent Strokes and Facts Of Life; an audience favorite as “Liz Chandler” on the soap opera Days Of Our Lives; spokesperson for the Juvenile Diabetes Research Foundation; the author of five books benefitting people with diabetes; a keynote speaker for corporations and non-profits; and one of few artists to sing two nominated songs on the Academy Awards. Her newest CD, A Playlist, features her R&B sensation son, Robin Thicke, on two tracks.

Daphne Wayans is an American television personality and relationship expert. She is best known as the former wife of Keenen Ivory Wayans, creator of the FOX sketch comedy In Living Color. She is a strong supporter of many philanthropic causes including Love Can, a woman of unshakable faith and values and a loving and dedicated mother.

Actress, comedienne, and television personality Beth Littleford supports the cause. She is best known for being one of the original correspondents on the popular Comedy Central satirical news series The Daily Show; she is also known as Tripp's mother Beth Campbell from I'm in the Band and Ellen Jennings in Dog With a Blog.

Abigail Hargrove, a young actress with a big heart, supports America's children with the Love Can Initiative. This 14-year-old landed her first big acting job in World War Z, in which she's fending off zombies alongside none other than Brad Pitt.

The Love Can Initiative is a non-profit organization that unites people to spread love throughout the United States for children in need. The Love Can Initiative was founded on the principle that no child should have to suffer from lack of anything. Influential people are asked to help build awareness and to be a part of the solution that no child should be left uncared for, untreated from treatable illnesses or lack of nutrition, a warm bed or education that can improve the quality of life around them. Director of the Love Can Initiative, Andy Tsagaris is the visionary behind the organization. He has developed national media campaigns; photographed many notable faces in business, music, television, comedy, film, fashion, and sports; published work and editorials in national magazines.

According to the U.S. Census Bureau, more than 146 million Americans are either "poor" or "low income". That is nearly half of America. Today, 22 percent of all children in the United States are living in poverty. The Love Can Initiative mission is to provide the basic necessities for the life of a child. To encourage the spirit of community and understanding among people from diverse cultures, races and religions.

How to help: Go shopping at Shop For Your Cause. To submit a photo to support the cause, visit lovecan.us and help build awareness. Spread the word about the Love Can Initiative and post the link http://www.lovecan.us on your social media page (Facebook, Twitter, blog.) Learn more about the facts of U.S poverty and children in need. Initiative news, updates and public service announcements are available regularly on Facebook, Twitter, and YouTube. 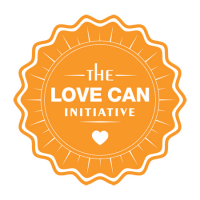