Saskatoon, Canada -- (SBWIRE) -- 07/08/2013 -- While the supernatural genre has seen something of a recent boom, many narratives are chock-full of clichéd vampires, werewolves, angels and faeries. However, a compelling new series by Joanne Brothwell is breathing new blood onto bookshelves with a supernatural series boasting wholly fresh concepts that are based on hard fact and good old legend.

The ‘Stealing Breath’ series is gripping ‘New Adult’ (a crossover between Young Adult and Adult) readers who are chomping at the bit to embark on a literary adventure that is free from the norm.

Book One - Stealing Breath: Deep in the backwoods of North Dakota, twenty–one year old Sarah Ross is searching for a missing child when she is attacked by a glowing–eyed, transparent... creature. Sarah survives, destroying the monster by using mysterious abilities she didn’t even know she had.

Bloody and bruised, Sarah flees the scene and runs directly into Evan Valente, a handsome, charismatic stranger who helps her back to safety. But what is Evan doing out in the forest at five in the morning?

Turning to a healer, Sarah is shocked to learn her eyes bear the mark of the Indigo Child—an evolved human with the ability to feel the emotions of others. But her indigo aura also makes her an easy target for those who wish to consume her powerful essence.

Soon, Sarah is falling deeply in love with Evan and wants nothing more than to follow her heart and trust that he is the man he says he is. But she can't ignore the lingering feeling that Evan is hiding a terrible secret. The deeper she digs, the more danger she faces, leading her on a course that will force her to face the darkest, innermost parts of her soul.

Book Two - Silencing Breath: Just as Sarah Ross is learning everything she can about her new abilities as an Indigo Child and settling into a normal life with her beloved Evan, her entire world shatters when Evan disappears without a trace.

Desperate to find him, Sarah’s search leads her to a sadistic serial killer who confirms her worst fears are true; Evan has been kidnapped, and he is once again in the clutches of his abusive family of necromancers.

Sarah uncovers not only Evan's dark past he tried so desperately to protect her from, but also The Key of Solomon, an ancient text for summoning the dead.

Knowing her abilities are limited in the face of this ancient power, Sarah is forced to face the Malandanti in order to save him. However, one question remains: once he is found, will Evan be the same man she fell in love with?

As the author explains, her books are heavily inspired by the beliefs and encounters of real people.

“The Indigo Child is a New Age concept - many people believe there are Indigo Children who are extremely intelligent and have extrasensory abilities (psychic, telepathy, etc). This story would appeal to many readers because it contains an element of mysticism people believe,” says Brothwell.

Continuing, “The Skinwalkers of the story are a true Navajo legend. The idea for this novel came to me as a result of a story told to me by an Indigenous Canadian, of a time she was on a road trip in the US and her car was shaken by a laughing ‘something’ while she was trying to sleep. After telling some of her Navajo relatives, they said these tricksters were Skinwalkers; people who practiced ‘Bad Medicine’ and could perform astral-projection!”

With the books’ popularity expected to soar, interested readers are urged to purchase their copies as soon as possible.

The first two volumes in the ‘Stealing Breath’ series are available now: http://amzn.to/11dXidV

About the Author
Joanne Brothwell lives in the country on the Canadian prairie where her stories are inspired by the dead things that appear at her doorstep on a daily basis. Of course, her two pets, a retired police dog with titanium fangs and a feral barn cat missing two toes, make the safety of surrounding wildlife, at best, uncertain.

Joanne is known to daydream, and ever since grade school has been accused of having a poor attention span. The truth is, Joanne has an alternate reality inside her head, where characters speak to her, sometimes so loudly (and incessantly) she just can't hear anything else! 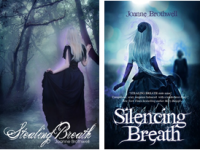