Catherine Calarco and Steven Kotler discuss the new book Stealing Fire and how to harness new states of consciousness for peak performance.

Phoenix, AZ -- (SBWIRE) -- 02/06/2017 -- In a conversation with Steven Kotler, the synthesis of knowledge around peak performance provides insight and wisdom that we can all apply. I had the opportunity to ask him a few questions.

How did you evolve from studying Flow to writing the new book – Stealing Fire?

Through our twenty years of work training individuals and organizations in the use of flow—a non-ordinary state of consciousness with a long track record of improving performance—we discovered that these same people had been regularly utilizing a far wider range of altered states to help them heal trauma, boost creativity, augment collaboration, and tap into a level of insight and inspiration unachievable any other way. As this idea flies in the face of so much contemporary thought about high performance, we couldn't resist the opportunity to fully explore it for the first time and to open-source our findings so all can share in the benefits.

What Is Stealing Fire About?

It's about today's $4 trillion revolution in using altered states to achieve ultimate performance. The revolutionaries behind it are some of the world's most influential and organizations, but it's only been talked about underground…until now. Developments in four fields—psychology, neurobiology, pharmacology, technology—have helped us decode this phenomenon with science to move past the myths, assumptions and misguided controversies As a result, people are gaining access to an unheard-of level of mental and physical performance. Studies show that altered states boost motivation and creativity nearly 400 percent, while cutting learning times in half. And similar results are showing up with collaborative skills as well, to say nothing of the enormous healing benefit these states can also provide. This proven revolution in human possibility will impact and improve all of our lives.

Because the terminology surrounding altered states is mired in connotation and misunderstanding, we decided to borrow the Greek term "ecstasis" to describe the states we're exploring in this book. Ecstasis means both to "stand outside oneself" and to be "filled with inspiration." It describes a range of non-ordinary states—from peak performance "Flow" states to contemplative and mystical states to psychedelically-shifted states—that, from a scientific perspective, share remarkable neurobiological overlap.

Both isolation float tanks and brainwave-tuning via neurofeedback were state-changing techniques developed during the early 1960s. By decade's end, both had become deeply embedded in the counterculture and generally ignored and/or maligned by the mainstream. Yet, the Navy SEALs have combined these technologies to produce a profoundly altered state of consciousness with deeply practical purposes. SEALs are routinely deployed deep in enemy territory, where great language skills are critical for survival. By combining these two state-changing technologies, the Navy has discovered it can train soldiers in foreign language fluency in six weeks—rather than the six months it normally takes.

Why Don't People Know About the Relationship Between Non-ordinary States and Peak Performance?

We've been missing the link for three reasons.

First, all the different techniques for ecstasis—from meditation and martial arts to adventure sports and sexuality to attending a festival like Burning Man or zapping your brain with electrodes—all have different adherents and subcultures that rarely talk to one another and often dismiss each other. But, if you use the underlying neurobiological changes produced by all these experiences as your guide, then you start to realize these seemingly disparate groups have far more in common than most would suspect.

Second, we have an incredibly powerful blindspot—call it the "Pale." And the Pale has three core components. The Pale of the State refers to the fact that there are "state-sanctioned states of consciousness," meaning cultures develop preferences for which consciousness-altering techniques they prefer and tend to develop both norms and laws in support of it. The Pale of the Church refers to the fact that many religions deploy state-changing techniques on a regular basis, but often try to take credit for and control what is actually a normal, biological experience. The Pale of the Body refers to our preference for experiences that are generated within ourselves and without outside assistance, thus technologically-mediated experiences of ecstasis tend to be suspect (like the idea that psychedelics cannot provide authentic mystical experiences).

Third, these experiences can be dangerous. Hedonism, Commercialization and Militarization are the three most common pitfalls. Non-ordinary states can become addictive to the point of destructive. They can also be used by marketers to hijack our fundamental neurobiology and motivate us to buy more stuff. Finally, governments around the world have spent the past fifty years trying to develop consciousness-shifting weapons (truth-serums being one of the most obvious examples). And with the acceleration of the four forces for ecstasis (psychology, neurobiology, pharmacology, technology) these dangers are only going to increase.

How Big a Revolution Are We Really Talking About?

The desire to change our state of consciousness is, as UCLA's Ron Siegel suggests, a "Fourth Evolutionary Drive"—meaning it's as powerful as our drives for sustenance, shelter and sex. It occurs in almost all birds and mammals, and has shown up throughout human history as well. In the metrics of hard dollars—people annually spend $4 trillion pursuing these changes in consciousness. That's one-sixteenth of the global economy we already devote to this practice. But that number is going to grow.

It really comes down to precision. When we pursue these states haphazardly, the results can be disastrous— all sorts of addictions, complications and setbacks arise. When pursued intelligently and skillfully, they can heal trauma, relieve anxiety, boost creativity, improve productivity and powerfully connect us to each other. And that's exactly what the four forces provide—an incredibly skillful and intelligent way to pursue these states and harness their benefits. It's a precision revolution, giving us access to the both the states we desire and the skills they unlock nearly on-demand. So that $4 trillion—that's merely the starting point.

To learn more listen to Steven Kotler and Catherine Calarco on Humanity Evolve! on VoiceAmerica. 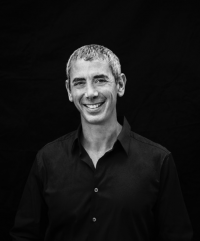