Smart Crowdfunding is slated to carry out strategic marketing initiatives for Scale75’s crowdfunding project launched recently on Indiegogo. The project supports the latest addition to their Steam Wars miniature series.

Madrid, Spain -- (SBWIRE) -- 02/05/2014 -- Hoping to raise roughly $6,800 USD in support of their Steam Wars 2 crowdfunding project on Indiegogo Scale75 appeals to collectors who want to get a jump on their latest design. The newest creation in the company’s impressive 75mm Steampunk style scale-miniatures line is a biker named “Sarah Kilmister”. The new Scale75 miniature girl is seductively set within a detailed background beside an exclusive Steampunk motorbike. The provocative miniature is designed by renowned illustrator Adrian Prado and modeled by noteworthy sculptor Alfonso Prieto.

Jorge Lopez, Production Manager at Scale75 said of the Steam Wars 2 miniature model, “Sarah Kilmister has raised the bar on complexity with a not so subtle eroticism that’s captivating to say the least. Of course all this is intentional as we wanted to create an exciting challenge for our collectors and engage a new audience as well. Suffice it to say this model, once funded on Indiegogo, will surpass the allure and elegance of our previous creations bar none.”

Painted by famous artists in the miniature fantasy-world genre Elias Alonso and Alfonso Giraldes the Steampunk Sarah Klimister carries Scale75’s brand of unique stylized detail and production quality. Perks for the crowdfunding project that will bring her to the marketplace include a Steam Wars poster collection, the Amelia Steam, Fix It Sam, Kitty Reimer, Ilsa Mech figures and their respective posters. Additionally, the new Sarah Kilmister and her poster is available as a perk and for a larger contribution one can have her with a female face of one’s own choosing.

About Scale75
Scale75 is based in Madrid, Spain and is recognized worldwide in the creation, production and marketing of metal figures in miniature. The company’s catalog includes fantasy, characters, heroes, myths, legends, villains and warriors throughout history created upon the most revolutionary artistic concepts of modeling. Scale75 is known for its ability to create a distinguishing style in character, movement, detail, strength, beauty and epic. 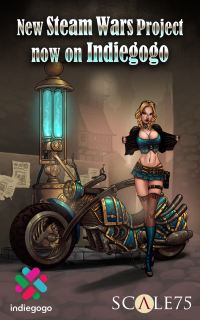