Homewood, AL -- (SBWIRE) -- 12/10/2012 -- Shadow Caster can be purchased in paperback through Amazon and in e-book through most formats including Kindle, Apple products, Smashwords, Nook, Sony, Kobo, Diesel, Baker-Taylor's and Page Foundry. ?This book is a fiction adventure for all ages. Anyone who likes a story filled with action and supernatural activity will enjoy reading Shadow Caster.

The story revolves around a boy who discovers a new world around him and inside himself. He and his two friends provide an innocent, lighthearted, and sometimes comical, approach to dealing with situations from saving a dog to fighting with evil spirits. The boy goes from geek to a supernatural powered geek by discovering the lost practice of Shadow Casting and uses the powers to save his grandmother.

Stephen Colter, the author of Shadow Caster, lives in Birmingham Alabama. The idea for Shadow Caster spawned from a near death experience he had many years ago. During a family beach trip he almost drowned in a riptide. At one point, when he was seconds from black out and looking up to see that the surface was surely beyond reach, something propelled him upward. It was phenomenal, unexplainable and incredible to him. He couldn’t explain the force that propelled him but his imagination generated the possibility of what it could have been. That possibility became the spirit of the Shadow Caster.

Updates and details available on http://www.stephencolter.com

Ebook on most readers and free to U.S. libraries on http://www.smashwords.com

Email scolter@stephencolter.com with any questions 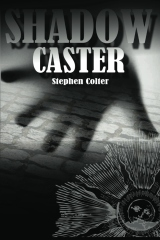