Stew’s Bail Bonds, renowned name when it comes to Bail Bond services in Minnesota, is educating thousands about the harmful effects of meth or Methamphetamine. The Bail Bonds Company is reaching out to the schools to educate youth on the dangers related to the drug.

Red Wing, MN -- (SBWIRE) -- 10/02/2013 -- Stew’s Bail Bonds, a Minnesota based company known for Bail Bond services is helping schools in the state impart Meth Education to the students. The company is reaching out to the schools and making efforts to ensure that youth become aware of the bad effects of Meth. The company is playing its part in the welfare of the community by offering bail bond services and teaching student about Meth.

When contacted, Stew Peter the president of MN Bail Bond Company said, “This really is a problem, people who had everything from homes, businesses, cars, and a happy family are losing everything. They are losing their material items, their money, and then their families as a result of the drug.” He further added, “The meth problem in Minnesota is getting out of control. It is leading to the death of many young people.”

Sources confirmed that the number of youth who are being introduced to the Meth every year has gone up in the recent past. The State of Minnesota’s D.A.R.E. program has come along with Stew's Bail Bonds MN Company to educate about the dangers of Meth. They are supporting the cause together. Stew Peters from the company visits the schools and speak about real life environment on the streets of Minnesota. The company has a small but impressive speech called - The Faces of Meth. The speech is available for any school that wish to host his scary, but truthful and blunt approach.

The reputed company for providing inclusive services at affordable prices is also offering free warrant checks in MN that helps to navigate through the criminal release process. The Fast Bail Bonds of the company helps in clearing the warrant and getting a new court date, while avoiding a county jail.

About Stew’s Bail Bonds
Stew’s Bail Bonds (http://www.freemefast.com) is a leader in the Bail Bond business in MN. The company is professionally licensed in 24 Minnesota Counties. 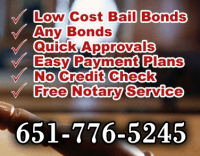