Kyiv, Ukraine -- (SBWIRE) -- 08/02/2012 -- DDos (or distributed denial of service) attacks are all too common in today’s Internet landscape. Using an army of slave computers, DDos attackers bombard servers with repeated requests, tying up the computational power and bandwidth and effectively taking them offline for legitimate users. This is a huge inconvenience to individuals, and it can also have a big financial impact on businesses.

One service working to limit the impact of DDos attacks is Stop-DDos.net. The site has been getting a lot of attention lately for its DDos protection service , which guarantees that customers sites will stay online even in the midst of a normally devastating DDos attack.

The service comes in three levels of protection: Proxy Lite, Proxy 250 and Proxy 400. Each package is tailored for different types of website. Proxy Lite is ideal for smaller websites that receive less traffic and might expect to undergo a less heavy attack. Proxy 250 is a more advanced option, suitable for more popular websites. It also includes free DDos protected hosting for extra mitigation. Proxy 400 is professional level protection, designed for large corporate websites that might expect to undergo a severe attack.

A spokesperson for Stop-DDos.net explained the true cost of an attack:

“Unfortunately many customers only find us once they have come under attack and often lost thousands in revenue. Our service is quick and effective but we also want to promote prevention rather than just cure. We would urge all webmasters to protect themselves before it’s too late.”

For webmasters interested in more information on DDos the site also contains a plethora of useful editorial content about DDos protection and related issues.

A spokesperson for the site said:

“Sadly DDos attacks on legitimate businesses are becoming both more common and more effective. Attackers sometimes control thousands of other computers, and will use them to attack websites on the flimsiest of pretexts. This type of attack is often cyber vandalism, performed indiscriminately with no real reason other than the amusement of the unscrupulous individuals behind it. We wanted to create a service that is truly effective against this type of attack, and completely protects the websites that are unfortunate enough to fall victim. Our unique protection strategies are specifically designed to mitigate the effects of even the strongest and most sustained attacks, and even huge corporations trust us to protect their servers. The cost of DDos protection is a big issue for many businesses, so we also worked to make things as affordable as possible.”

About Stop-DDos.net
Stop-DDos.com is a service designed to protect business owners from distributed denial of service attacks. 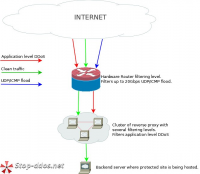