Mountain View, CA -- (SBWIRE) -- 03/04/2013 -- Strongman events displaying human feats of strength were once only showcased in traveling circuses. But recently there has been a growing level of intrigue in the once obscure but storied sport of strongman training. On the heels of increased public recognition, Brian Shaw, the World’s Strongest Man™ in 2011 is preparing to launch his strongman training program, StrongmanAcademy.com, as an authoritative resource to help coach beginning and competitive strongmen.

Not only has Shaw been crowned the World’s Strongest Man™ (2011) but he is also a Certified Strength and Conditioning Specialist (CSCS). His recent track record suggests that as a coach, he will be quite effective as the last four competitors he has trained have won lightweight, amateur and/or professional titles.

"I want to show people how to do this at an exceptional level whether they are a competitor, a CrossFit strongman or someone who just wants to do strongman workouts at home."

Shaw says his Strongman Academy will take advantage of his worldwide network of professional strongmen to create what he envisions as the 'go to' authority in the strongman area of fitness. Like Shaw's workout partner, Mike Burke, who not only captured the "America's Strongest Man ® ” title in 2012 but also just crushed three grip strength world records a few weeks ago in Los Angeles. Also participating will be Level 1 CrossFit Trainer Dr. Ron Spallone, D.C. who heads Shaw's sports medicine team. Shaw said Spallone will help program CrossFit Strongman WOD's. (WOD: a CrossFit term for Workout of the Day).

Ten of the world's strongest men will compete for a coveted title this weekend at the 2013 Arnold Strongman Classic (Arnold, as in Schwarzenegger) on March 1st and 2nd. Both Shaw and Burke have qualified.

Shaw won that contest in 2011. And in the 2012 Arnold Strongman Classic he competed in 5 events even though he suffered a complete biceps tendon rupture during the first event. His now famous Youtube deadlift video of 1073 pounds with essentially one arm has gone viral.

Shaw says, "My main purpose in launching StrongmanAcademy.com is so competitors know how to win and beginners know what to do."

"You don't have to be 440 pounds to do this. Nearly anyone can do this at their respective level and benefit. I remember seeing a story on Olympic swimmer, Ryan Lochte doing strongman workouts. That was awesome. I want to be his coach (laughs)."

Shaw recently published a Youtube video of himself lifting a 558-pound atlas stone for two repetitions. He held the previous record stone loaded at 533 pounds. He will attempt to break that world record atlas stone lift at the upcoming Arnold Strongman Classic event known, quite appropriately, as "The Manhood Stones" competition. 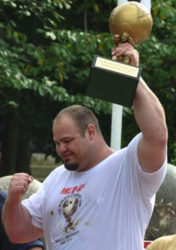