Suicide of the Month: Book of Satirical Short Stories Exposes Strangely-Humorous Side of Insanity.

Written and compiled by R.T. Barnes, the powerful new book takes readers through the dark and into the hilarious for a side-splitting journey to the humorous side of insanity. Don’t be fooled by its title; ‘Suicide of the Month’ will leave readers’ diaphragms in a spasm and their minds racing in a pursuit to make sense of it all.

Surrey, BC -- (SBWIRE) -- 09/24/2013 -- While it may first appear to be a sick and twisted regular feature of a monthly magazine, ‘Suicide of the Month’ packs in an abundance of satirical short stories that open readers’ minds up to insanity and all that’s funny about it.

Unique, bold and full of thought-provoking quips, Barnes’ latest release is already resonating with open-minded readers around the world.

We meet the mother of a faded teen star who has impregnated herself with twin panda fetuses for publicity, a mysterious didgeridoo virtuoso that you can't seem to ever get away from, and a corpulent mother-in-law with an urgent need for human organs.

Like Kafka on Paxil, R. T. Barnes takes you on a satiric journey through the dark and hilarious heart of the modern zeitgeist. For those with a taste for the humorous side of insanity, Suicide of the Month is a must read.

As the author explains, his book is certainly different to the norm.

“With this book I'm trying to find the oddness of just ordinary moments, and on the other hand, how ordinary the odd can seem, at times.” says Barnes.

While unconventional in its subject matter, the book has garnered a consistent string of rave reviews.

For example, “The stories owe an existential debt to Kafta or Becket... simple prose underscores Barnes' sublime take on the absurdity of modern life. It's a fun read...” Josh Brandon, mudandwater.org

Imparting the humanity mentioned above was Barnes’ main goal during the writing phase.

“I don't think that just being surreal or funny is enough to really carry a story through. You have to care about the characters. It's a fine line to draw but I feel I've achieved what I wanted. It’s certainly off-the-wall,” he adds.

‘Suicide of the Month’ is available now: http://amzn.to/1aHQM0a.

About R. T. Barnes
R. T. Barnes is a former marketing executive and is currently a full time writer. 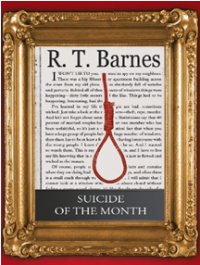