Cleveland, AL -- (SBWIRE) -- 11/01/2016 -- On July 6, 2016, the world of Pokemon was reintroduced to trainers in the United States with the release of the uber-popular app, PokemonGo. For many weeks, players spent money in the app, buying extra pokeballs, bags, and lures to further their quest of catching them all – to the tune of $160 million by the end of July. Though interest in the game has dwindled of late, many die hard players have continued to play, battling at gyms and catching rare Pokemon as they walk. Recently, Sun Charge Systems got in on the action when they helped the Birmingham Zoo in Alabama with their PokemonGo event: PikaZoo! Admission to the zoo was just $5 on Sunday, September 25 as players were encouraged to drop by between 4-7pm. Sun Charge provided two charging stations to help trainers keep their phones charged as they traversed the grounds of the zoo.

- 3 hours of lures at the Zoo's 29 Pokestops
- Battles between trainers at the two available Pokemon gyms
- A $1 Pokemon express train (perfect for hatching eggs)
- Giveaways and more!

During the event, all zoo pathways were open, with some animals on exhibit. All in all, it was the perfect way for the Birmingham Zoo to capitalize on the success of the PokemonGo app and offer players the opportunity to see the animals while catching digital monsters of their own.

"We were happy to partner with the Birmingham Zoo for this event, and we were told they had a great turnout for PikaZoo!" commented Geraldi Mejia, Operations Manager for Sun Charge Systems. He continued, saying "Our solar powered charging stations allowed players to keep playing without having to worry about battery power. We designed these solar powered stations to convert clean solar energy into electricity, which is then utilized by devices that are plugged in. Multiple devices can be charged at any one time, up to five – making it the perfect resource for serial users of laptops, tablets, and other mobile devices."

About Sun Charge Systems
Sun Charge Systems is leading the solar station market by providing a means for people to stay connected. Based in Cleveland, Alabama, they have found a way to utilize the sun and provide beautiful designs that are both practical and appealing to the eye. Solar charging stations have recently been housed in universities, water parks and municipalities over five states and are rapidly growing. 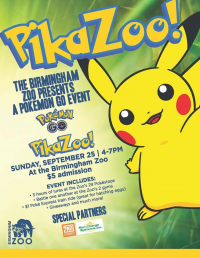