SurvivalWarehouse.com Announce a 1000% Increase in Sales as US Consumers Prepare for Civil Unrest

Geneva, FL -- (SBWIRE) -- 10/12/2012 -- The vast majority of Americans have a great deal of faith in the stability of the Federal government, but a growing number are becoming concerned about an impending crisis that could put the continuity of governance in doubt. Igor Panarin, a noted Russian political scientist and strategic forecaster, has predicted martial law in America before the end of the year. Even those who have previously had complete faith in the government have sat up and taken notice of this expert’s grim foreboding.

Survival-Warehouse.com, a leading online retailer of emergency preparedness supplies, has reported a huge increase in sales of freeze dried food and similar survival products. They believe this to be linked to the lead that Barack Obama has in the polls for the upcoming presidential election. Igor Panarin believes that civic collapse will be a result of Obama’s re-election and Survival-Warehouse.com believes that their large increase in sales is an indicator that the American public are beginning to understand that economic Armageddon is just around the corner.

However the situation isn’t so simple for groups and individuals who are interested in disaster preparedness. In the last year or so, supplies of freeze dried foods and emergency food stocks have been unable to cope with the surge in demand. Many survivalist and emergency preparedness groups throughout the country have been unable to get their hands on an adequate emergency food supply. The situation is only getting worse as more groups spring up all the time, and more individuals become fearful about the consequences of an Obama re-election.

A spokesperson for Survival-Warehouse.com said “We’ve seen some absolutely staggering increases in sales in the last couple of months, no doubt due to the impending election. Many groups and individuals strongly believe that an Obama re-election will be the cause of considerable civil unrest, and it could even lead to all out civil war. Understandably these people are preparing for the worst. The large increase in demand has lead to shortages, and while we do still have emergency food supplies in stock I would advise anyone who is concerned about the political and social landscape after a potential Obama re-election to start preparing now. Later may be too late. “ 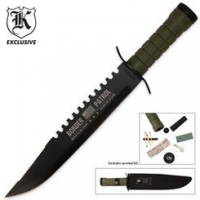