Smart Crowdfunding is slated to carry out strategic marketing initiatives for Suspended Soup, a Portland restaurant that will allow customers to “pay it forward” and feed the area’s homeless by way of a suspended soup credit.

Portland, OR -- (SBWIRE) -- 01/28/2014 -- With a $36,000 goal Jen Pedersen and Laura Smith have launched a crowdfunding project on Indiegogo to support their Suspended Soup project. An endeavor that puts one in the mind of the popular film “Pay It Forward” the project will allow customers of the duo’s soup restaurant to purchase what they call Suspended Soup Credits to help feed the Portland, Oregon area’s homeless population. With the use of a campaign rewards program Pedersen, Smith, and crowdfunding supporters will create a bank of Suspended Soup Credits that will allow the program to hit the ground running when the restaurant celebrates its grand opening in October.

Inspired by the suspended coffee trend that was first reported as “caffe sospeso” in April of 2004 in the Italian online newspaper Nove da Firenze, this particular wave of kindness has now taken root in Bulgaria, the European Union’s least wealthy country. To date, more than one hundred and fifty cafes across Bulgaria have joined the goodwill initiative modeled after caffe sospeso found first in the Italian southern city of Naples. To that end, several fast food restaurants and grocery shops have joined the tradition in Bulgaria and propose that their customers buy an extra loaf of bread or a snack to hold in suspension for a hungry person in need. Not in any way lost on Americans a Connecticut Starbucks reports that nearly 1,500 customers “paid it forward” and bought the coffees of drivers behind them at the vendor’s drive up window during a days-long chain of Christmas cheer ending on December 28th. Suffice it to say, it seems as though goodness is catching.

So says Pedersen, “We often think that making a difference is something we can’t do because we may have a lack of finances, time, or just don’t know where to trust our donations to. As a result we’re left feeling at a loss. Now, with Suspended Soup in Portland, customers can make as little as a $5 donation towards a hot bowl of soup and create a difference in the life of someone who may have not eaten that day.”

It is the hope that Suspended Soup will help to feed the 1,800 homeless people who sleep on the streets of Portland nightly. With funds raised through Indiegogo Pedersen and Smith will purchase the necessary equipment needed to open the soup restaurant that will serve customers in a prime location of the city. Their restaurant’s prime location will make ample use of the high concentration of foot traffic and a population of approximately 32,000 people within a half mile radius. The restaurant is slated to offer bicycle delivery to area residents and local businesses and will also endeavor to support a green business model. By October of this year Suspended Soup will enjoy their grand opening as well as partnerships with Portland’s Salvation Army, Union Gospel Mission and Potluck in the Park to help provide food where it’s needed most.

About Suspended Soup
Suspended Soup is a restaurant founded in 2013 by Jen Pedersen and Laura Smith in Portland, Oregon. The restaurant not only supplies area residents with exceptional soup by way of walk-in and delivery orders but it also supplies the homeless population with food via their Suspended Soup Credits Program. The program allows customers to, in addition to their own meal, pay for a serving of soup that will wait suspended for a homeless person that comes into the establishment in search of a hot meal. 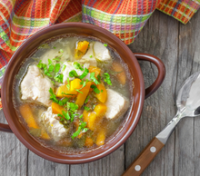