Eva Márquez’ debut novel, Sweetest Taboo, is inspired by the true and often tragic stories of students who fall in love with their teachers and live with the hard truths of forbidden romances. In a world full of after-school specials on sexual predators, this touching story seeks a different path, casting both student and teacher in a gentle light.

Pomona, CA -- (SBWIRE) -- 07/26/2012 -- Author Eva Márquez grew up as an immigrant in a lower-to-middle class Southern California suburb. Now she taps that experience in the first of a planned series of books that chronicles the love affair between a young Hispanic schoolgirl and her much older, married teacher. The book is entitled “Sweetest Taboo” and is written from the perspective of the young female student, who relentlessly pursues her teacher.

Eva drew from her many experiences growing up to develop several plot ideas. “Romantic experiences are universal,” the author said. “Provocative, illicit and risqué contexts do not take away from the experience of love, and that’s what this debut book sets out to communicate.”

Eva also was intrigued by the news of one of her former teachers being convicted of [sexual] misconduct with a minor. “I have always been fascinated by similar stories making the news, but, like many people, wondered about how these relationships originate and how they flourish under the radar. Now I get to unravel the clandestine relationships, one exciting page at a time.”

The series will capture the mysteries, heartbreaks and flourishing love of a fictional student-teacher romance. Sweetest Taboo focuses on the innocent beginnings of this illicit romance, as well as the course it takes, while the next book in the series will narrate the main character’s beginnings as an immigrant youth in a Los Angeles suburb.

Praise has already begun rolling in for Sweetest Taboo, which earned a place one the Quarter Finalist list for Adult Fiction / Romance genre in the 2012 Amazon Breakthrough Novel Award.

Sweetest Taboo will be distributed worldwide via all online booksellers starting September 1, 2012.

Pre-orders are being fulfilled through the book’s website, http://www.SweetestTabooBook.com with the first 200 orders receiving a signed, first edition copy of the paperback, along with select promotional items. The paperback retails at $14.99 and the e-book version will retail at $9.99. Sample chapters are available at no cost on Goodreads.com/eva_marquez. A video trailer is also available on YouTube.

A special 3-month book launch promotional period was launched on July 25 running until November 30. As part of the promo for every book that is sold $1 will go into a ‘piggy bank’. As readers grow the piggy bank, by purchasing copies of the book, they will increase the amount of funds available for the randomly selected promo winner. The promo winner will select an HIV/AIDS charity/org to donate half of the piggy bank to, while he or she takes the other half to the bank. The promo winner will be announced on December 1, 2012, World AIDS Day.

About Eva Márquez
Born in Buenos Aires, Argentina, daughter of European immigrants, Eva Márquez has spent most of her life outside of her home country. At the age of five, Eva accompanied her parents to the United States, where the family settled permanently. After graduating from university, she went on to complete graduate studies in International Relations in Spain.

Eva received her Master of International Studies degree from the University of Sydney and went on to work in the global health field in Sub Saharan Africa and South East Asia. Eva is currently a doctoral candidate and resides in Southern Africa. 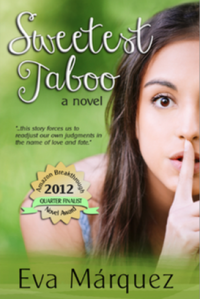