Albany, NY -- (SBWIRE) -- 02/27/2013 -- Tattoos have been a cultural practice since the dawn of civilization, and ever since the imagination and evolution that has gone into them has been ongoing. With modern technology, it’s possible to be more creative and ambitious than every with Tattoos, to the point at which their quality is largely down to the skill of the artist and the imagination of the one making the request. Tattoo Ideas for Men And Women is an online magazine that specializes in inspiration for just such an occasion.

The latest releases from the online magazine blog feature animal tattoos of all kinds. Again, the history of this particular style goes back centuries, but the quality of artistic production is at its highest ever. The site demonstrates some of the genius at work in animal tattoos as well as some of the mistakes and poorly executed ideas as warnings for what to avoid.

The posts begin with man’s best friend, dogs. From detailed portraiture to stylized silhouette, outline, and cartoonish pastiche, there is no shortage of ideas. The posts then go on to feature more exotic animals, with dolphin, fish and cobra tattoos. The existing posts also discuss ideas like gun tattoos, with a holstered gun in a garter on the thigh proving one of the more innovative ideas..

A spokesperson for Tattoo Ideas explained, “We know that once something is inked on the skin it’s there forever, or at least very expensive to remove or conceal, so it’s important that individuals love their tattoo design and that it works with their body, and even their other pre-existing tattoos, before they decide to get it inked. Our site is designed as a discussion of inspirations that our team believe readers will find interesting and informative, and open up some new angles on more creative tattoo choices than you might see on a dingy scratch shop wall. We believe tattoos are an expression of individuality, so the more creative the better. We’ve recently added the 38 craziest Tattoo ideas for men which we hope will give even more inspiration to our readers.”

About Tattoos Ideas For Men And Women
Tattoo Ideas offer great tattoo ideas for both men and women. The site is updated very regularly with new and unique ideas that tattoo enthusiasts can use to design their next tattoo! They also offer tutorials and advice about tattoos in general. This is an amazing resource for both first-timers as well as experienced tattoo enthusiasts. For more information please visit: http://tattooideasformenwomenmag.com/ 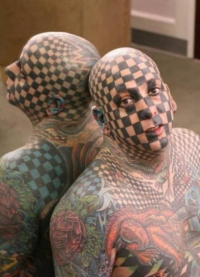