Shanghai, China -- (SBWIRE) -- 09/04/2012 -- Mobile smartphone and tablet gaming have been the life of devices for as long as anyone can remember, but with the vast amount of games available today, deciding which to download and play next is a hard choice.

Zombie Chasing’s intense gaming experience can be credited to the perfect development of the game. Zombie Chasing was created with swipe and tilt controls for comfortable gaming. The mind-blowingly detailed 3D visual effects, visible across four unique chapters, are also waiting to be explored.

The game is zombie themed with four gorgeous scenes, one of which is an underground dungeon. The iPhone game also has the ability to let a player choose points of views—a player can now be a zombie or an explorer as they maneuver their way through the game. Zombie Chasing has nine different characters to choose from—unlike Temple Run’s seven characters— and users can revive their explorer/zombie for an additional life by using the game’s play cards. Collecting coins gives players the option to power up their characters.

Additionally, gamers up for a challenge are especially excited about one of Zombie Chasing’s features: the ability to compete with friends via the Game Center leaderboard.

The official trailer for Zombie Chasing is has already been uploaded on YouTube for players interested in a sneak preview of the game. Through the video, available at http://www.youtube.com/watch?v=utvrdNljP8M, viewers are able to see the intense detailing of the game, especially when the video is played in high definition. The trailer also gives players an idea of how the game will look like when played in both explorer and zombie mode, and demonstrates some of the game’s other cool features like character revival.

MagicBone, a developer of popular gaming apps such as Pyramid Run and Pocket Fighter, assures players that Zombie Chasing will be “full of fun [and a] highly addictive gameplay.” They encourage fans to subscribe to their Zombie Chasing Facebook page, which is designed to give fans all of the most up to date information concerning the game. For example, those who ‘like’ the Facebook page will know the release date of Zombie Chasing, as well as get early bird updates when the game is live!

About MagicBone
ShangHai, China-based MagicBone LLC. was founded in early 2012, and is dedicated to rapidly developed and published mobile apps and gaming. The IOS application company focuses on creating and developing high quality games that will make their users happy and keep them entertained for hours on end. For more information, please visit http://www.magicbone.com/zombie 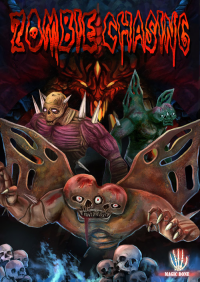