With hundreds of established and up and coming stars embracing them at the GBK 2011 MTV Movie Awards Lounge, temporary tattoo sleeves have become the new “it” item to have for people of all ages. Tattoo sleeves slip over the arm like a stocking and give a realistic tattoo effect. In addition to being a great body fashion accessory, the tattoos are being used in movies, on fashion runways and by everyday party goers. “It was a real source of pride to be a sponsor of the GBK MTV Movie Awards Lounge, and the celebrities loved our tattoo sleeves,” said Priceco Australia Founder Lucas Price. “Tattoo sleeves really make a bold, fun image-changing statement without being a lifelong commitment.”

As a trusted worldwide seller of Tattoo Sleeves since 2007, Priceco Australia was among the first to introduce temporary tattoo sleeves to the world and now sells them in over 100 countries. The items feature dozens of designs from tribal, rock and PlayStation Tattoo design categories plus many more.

GBK, the luxury lifestyle gift lounge and special events company, honored the 2011 MTV Movie Awards on June 3 and 4, 2011 with a vintage cinema inspired gift lounge at the SLS Hotel in Beverly Hills. An exclusive list of invited celebrities, VIPs and media enjoyed an electrifying environment full of lavish gifts, sweet treats as well as musical and dance performances that were part of the event’s charitable focus. As one of the sponsors of the lounge, Priceco Australia provided celebrities from television, film and sports with their temporary tattoo sleeves.

Many of Hollywood’s brightest young stars embraced the temporary tattoos including those from Twilight, Pretty Little Liars, Glee, X-Men: First Class, Greek, Vampire Diaries, Modern Family and many more. “We had a real blast with all of the stars and everyone wanted to get their pictures taken with their tattoo sleeves, so we posted them on our Website along with some great videos,” said Price. To learn more and purchase the tattoo sleeves, please visit http://tattoosleeves.us/

About Priceco Australia
Priceco Australia, owned by Lucas Price, is a worldwide seller of temporary tattoo sleeves. The breathable and durable skin-tight spandex and nylon sleeves feature dozens of realistic tattoo designs. In addition to being sponsors of the GBK 2011 MTV Movie Awards Lounge, The temporary tattoos have been featured in the GBK 2011 Kids Choice Awards Celebrity Gift Bag, Disney Land Florida and high profile events around the world. 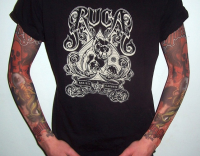