Customers can be rude, demanding and miserable. The hours can be long, difficult and painful on the feet and back. And for most, the wages are less than ideal.

Curtis and Josie Epperson know all about the ins and outs of the restaurant industry. The Memphis, Tennessee couple has worked for years in many positions at a variety of restaurants. Like most restaurant employees, they have their share of war stories to tell.

But rather than dwell on their many challenging tales of serving crabby customers while lugging around huge trays filled with heavy food and beverages, the Eppersons decided to take their sometimes negative memories and turn them into something funny.

For the past four years, the Eppersons have been hard at work putting together a comedy music website they named “Push The Fish,” a reference to the 2005 cult movie classic “Waiting.” Called “Comedy music for the restaurant industry,” the website features funny songs, videos and news that every single waiter, waitress, and bartender in the country can relate to.

On February 1, Curtis and Josie will release their debut album “Tipping Is For Everyone,” which they hope will both entertain their waiter and waitress brothers and sisters while also—ideally—educating the customers.

As the couple put it, “If ‘Weird Al’ Yankovic and the guys from Saturday Night Live all waited tables, and then got together and made an album about it, this would be it.”

Besides being highly entertaining and funny, the album is quite the musical feat in itself—all but one of the songs are performed a cappella, with Curtis “singing” all of the instruments including drums, guitars, horns and others. From the sarcastic “The Birthday Song” to their homage to the classic 80s style love song with “15 Percent,” “Tipping Is For Everyone” promises to keep anyone who has ever been stiffed for tips laughing out loud while nodding their heads in agreement.

About Push The Fish
Push The Fish is a comedy music website hosted by Curtis and Josie Epperson, a Tennessee couple who have years of restaurant working experience under their collective belts. Inspired by their often trying days attempting to please difficult customers—all while keeping smiles on their faces—the Eppersons created both the site and an album of songs titled “Tipping Is For Everyone” as a way to find humor amongst the challenges. The two will launch their debut album on February 1. For more information, please visit http://www.pushthefish.com 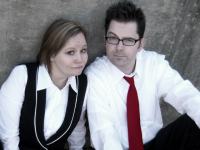