Noord Brabant, Netherlands -- (SBWIRE) -- 07/30/2013 -- Marthijn Brantjes, Creator of The 4 Crown Project has launched an Indiegogo crowdfunding campaign in hopes of raising just under $30,000 to make his dream project possible. With a desire to craft high quality replica crowns for showcase rental at private parties Brantjes has focused his attention on four historical items he means to replicate. “I want to make one Dutch crown and three English crowns.” said Brantjes. “Normally people don’t get the opportunity to be so close to such a thing of beauty but with The 4 Crown Project I hope to change that.”

Normally behind lock and key in the Tower of London, and the like, royalties accouterments are not usually open for public viewing. However once the materials are combined and the replica crowns are created Brantjes wants to exhibit them for a short time at various locations. Once the exhibits are completed Brantjes will rent the crowns in glass cases for private party viewing. He intends to create a website whereby a listing of all the crown’s information is available and rental options are given.

Formidably, Brantjes has garnered the attention of Bonebakker, the company based in Amsterdam that made the crown for King Willem II in 1840 that is slated to be replicated. The Dutch replica will be made of copper and chromium that will then be gold-plated. The synthetic stones will be made of glass and high quality imitation pearls will be used. The English Queen Mother’s crown will be crafted from similar materials with an imitation ermine band. The second English crown, that of St. Edward, will make use of gold plated beads as well as the afore mentioned details. As will the third English crown, the Imperial State Crown. “I’ve spoken with many silversmiths and I’m so encouraged by Bonebakker’s interest in my project.” added Brantjes. 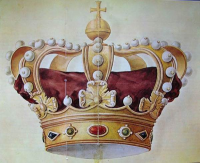 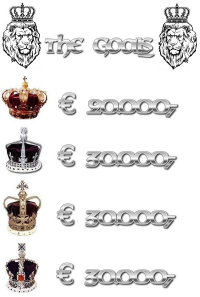