Las Vegas, NV -- (SBWIRE) -- 12/13/2012 -- Sliden is Announcing publicly today that their new social networking app, which is specifically designed to share slide shows is being released Free to the app store in time for the Holiday season. It is the first of its kind and was created when the owners joined the 90 Day App Challenge, which is a Virtual App Incubator based out of San Diego, California.

Andy Lepore, media contact and one of the partners and owners of Sliden, was asked recently how the app is unique over other social photo sharing applications on the iPhone. "Sliden created specifically for the iPhone allows users to share slide shows with all their friends and followers inside our community. Users can also share their creations with friends and followers on popular social networking sites such as Facebook and Twitter.

This is a unique app that is very different than any other due to the slide show 'creator' within the app itself. As far as our team is aware there is no other social networking app available on the app store that is based around sharing slideshows with followers and friends. It's no secret that more and more people are using their iPhone's for social networking, we just looked at the gaps in this market and came up with a new, cool way for people to share."

A feature very unique to Sliden is the ability users have to create and share slide shows with the world. It is powerful, fast, and has a custom built in-app slideshow creator that is very user friendly. The app is quite innovative and is expected to be a huge hit for iPhone users.

Using the support and resources of the Virtual App Incubator and the other developers over 90 days, the owners of Sliden created the app and put it through rigorous testing. It is being released for the Holiday season, so that anyone with an iPhone who loves taking photos can sign up, create a unique, fun profile and have the ability to share with their friends inside the community.

Through all the gift-giving and photo taking this Holiday season, Sliden is being offered as a free iPhone app that will help make the creation and sharing of photos with friends and loved ones throughout the year easier and fun no matter where they may be in the world.

About Sliden at 90 Day App Challenge
Working with the 90 Day App Challenge, which included the Virtual App Incubator, the company created and tested the new social media slideshow sharing iPhone application. As a result, of the 90-day challenge, there was a total of 18 iPhone apps created and one was Sliden. The Virtual App Incubator consists of skilled developers that worked together for 90 days, thus the '90 day app challenge' is the time given to create new apps. 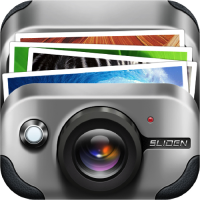