MFGpartners.net rides into Florida to the welcoming arms of local manufacturers and other businesses

Oxford, MA -- (SBWIRE) -- 07/26/2012 -- As one of the hardest hits states during the economic downturn over the last several years, Florida, with one of the largest unemployment rates in the country is pleased to see the American Machine Shops Network (http://www.MFGpartners.net) and its allies focus on helping local manufacturers in the state regain business. The company announced today it's working on a number of programs to help bring work back to Florida machine/job shops in Jacksonville, Miami, Tampa, St. Petersburg, Orlando, Hialeah, Pembroke Pines, Hollywood, and other major markets throughout the state.

Custom manufacturing was once a thriving industry in Florida with job shops all over the state specializing in all forms of custom-made parts, components and other made-to-order products, said MFGpartners.net spokesperson Shawn Brown. According to Brown, the Sunshine State has a significant number of seasoned machinist and other craftsman, many of whom has moved operations to the area primarily from the Northeast region in effort to reduce operation costs. AMSN is committed to bringing work back to such companies by developing trading partnerships between buyers and suppliers specializing in plastic and metal parts manufacturing on its website at http://mfgpartners.net/metal-parts-manufacturing

“The American Machine Shops Network is seeking to collaborate with local and statewide organizations, governmental agencies, businesses, senators, governors, congressmen, mayors, state reps, trade groups, business associations and even individuals that share its commitment to help Florida manufacturers prosper again, and bring work back to the region,” said Brown. He concluded, “Anyone interested in joining the 'Buy American' movement pioneered by AMSN can get more information at http://mfgpartners.net/link-to-us/

Florida and other US companies in need of custom manufacturing services can now submit an RFQ to machine shops nationwide at http://www.MFGpartners.net/rfq.html

About MFGpartners / AMSN
MFGpartners.net (http://www.MFGpartners.net) is owned and operated by American Machine Shops Network (AMSN). The company specializes in promoting US-based manufacturers of machined parts, fabricated components, precision products and molds. AMSN is the largest network of custom manufacturers in the USA designed to help companies, engineers and others find the most suitable vendors specializing in CNC machining, fabrication, molding, prototyping and other contract manufacturing services.

This news release was distributed by IndustrialPR.net 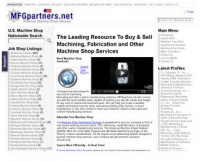