Agoura Hills, CA -- (SBWIRE) -- 04/22/2015 -- Global Genesis Group is proud to announce that they have acquired the exclusive worldwide distribution rights, outside of Canada, to the award-winning feature film "The Anniversary." Winner of the 2015 Best Feature Narrative Comedy at the prestigious Cinequest Film Festival in San Jose, California "The Anniversary" is a dark comedy about a woman's hopes and dreams for her missing husband to return during a dinner party on the evening of their 21st wedding anniversary. The Anniversary touches on several universal themes of being a single mom, a broken marriage and broken heart. Charles Morris Jr., Head of Development and Acquisitions for Global Genesis Group said, "GGG is thrilled to be promoting this charming and delightful indie gem. It is a throwback to classic independent films as the director Valerie Buhagiar takes the audience on a poignant journey of faith as Teresa's missing husband is a symbol of hope of their past. It is an intelligent, witty movie that is a perfect blend of laughs and human insights."

ActTwo Magazine stated, "The Anniversary is a well-crafted quirky slice-of-life drama that has many off beat comic moments. Buhagiar skillfully imbues the film with a gentle charm by using music by artists like Manteca, Michele McAdorey, Mary Margaret O'Hara, and Lyne Tremblay helping give the film an alluring and hopeful quality." Blogger Klausatgunpoint wrote, ""When films can play with tone, swing from one point to another on the emotional spectrum without missing a beat, that's when movies get really good. The Anniversary is one of the best example of tonal swing, and how it makes viewing that much more impressive...Hilarious at times, and other moments deeply touching...Overall, The Anniversary might be the most impressively wide-ranging film of Cinequest 2015!"

The Anniversary was produced by Valerie Buhagiar and Maurizio Trezzi through the company Boom In Productions, and directed by Valerie Buhagiar, in her feature film debut. Regarding the excitement of landing worldwide distribution, Buhagiar stated, "Boom In Productions is thrilled to be working with Global Genesis Group (GGG) in the distribution of its award winning feature film The Anniversary. After the film's rousing debut at Cinequest, the communication lines between the two companies stretched from Toronto, Antigua, Brazil and California as GGG and producers Maurizio Trezzi and Valerie Buhagiar developed a plan to get this first time gem out to the world." 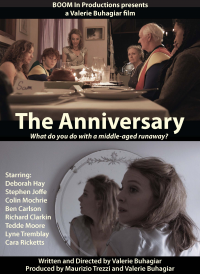