The Arcana of the Two Hands of God: NLP Practitioner Attempts to Fashion 'New Breed of Man' with Ground-Breaking New Book

Written by Queue McPherson, ‘The Arcana of the Two Hands of God’ uses compelling sources of wisdom and healing to form a new psychosocial technology that allows anyone to rewrite their life experience. Merging great eastern and western philosophies, the book is poised to resonate with readers around the world.

Vineyard Haven, MA -- (SBWIRE) -- 08/20/2013 -- According to renowned NLP practitioner and Hypnotherapist, Queue McPherson, man is caught up in a detrimental spiral of materialism, opportunism and self-glorification. However, by merging the eastern philosophy of Taoism with the west’s Stoicism, McPherson’s life-changing new book intends to inspire a new breed of man where heroism and balance run more than just skin deep.

‘The Arcana of the Two Hands of God’ is set to stake its own unique place in world history by combining global culture and theory for the greater good of humankind.

Men are now embroiled in a materialistic culture that fosters a shameless opportunism, spawning the kind of world where profit, convenience, and self-promotion are pursued and glorified. The urge to succeed; to attain money, status and power, has numbed our minds and blunted our sensibilities. Friends and family find themselves pitted against colleagues and clients for bits of our precious schedule. Televisions become babysitters, gifts replace affection, and success excuses shortcomings, while failure negates virtues. Such symptoms of social decay appear when the value of a human being is measured by whether he or she is useful or detrimental to our own agenda.

This widespread indifference necessitates a Herculean counter-effort on the part of those who seek to restore to humanity, the dignity of its individuals and, through it, a semblance of meaning to the term ‘humane’. This need to attain and preserve such an existence requires a new breed of man; a man of heroic stature; who truly understands the value of balance, equanimity, austerity and devotion. This type of social reformer will be willing to charge fearlessly through the wilderness of human complacency and would have to be extraordinary in many ways to be up to the challenge of what amounts to a global revolution.

The Taraman master walks this path of heroic charity; which is the active and unwavering mercy toward those who seek no harm, coupled with a relentless resistance to those whose hearts are filled with malice, and are quick to leap into mischief. His joy is found in doing the greatest good, while his peace he obtains by doing no harm.

I seek to demonstrate the sources and background for this social philosophy by presenting a unique rendering of the Tao Te Ching, upon which Taoist philosophy is founded and of the Manual of Epictetus, from Stoic literature. I intend to show that the teachings of the Oriental East and the Occidental west; while differing in their methods of presentation, are strikingly similar in their content, and in their visions for the future of humanity. That future, from where I stand, lies best in the hands of the hero-type described in this book, a type of hero that all of us could conceivably become!

As the author explains, his book can easily transform anyone’s life for the better.

“The sources of wisdom and healing contained in this book are life-transforming. They merge two great philosophies, one eastern in origin and one western into a powerful new life system that becomes greater than the sum of its parts when I unite them with my Sword of Detachment mind method,” says McPherson, who also practices as an amateur Philosopher.

Continuing, “The reader will learn to move easily into a clear detached mind state, at will, and will quickly gain the trust and confidence of those around him or her by emitting a natural aura of integrity and personal power.”

Since its release, the book has garnered a consistent string of rave reviews. For example, Les Thompson commented, “A most unusual and yet informative look at the state of the world we live in. Gave me plenty to think about -- an imaginative read that sparks in the reader ways to journey onward and outward.”

‘The Arcana of the Two Hands of God’ is available now: http://amzn.to/15Uf1Cz

More information can be found on social media:

Readers are also encouraged to purchase the author’s first book – ‘The New Age of Chivalry: Heroism, Healing and a New Code of Knighthood’ - his manual for living with true purpose and power.

About Queue McPherson
Queue McPherson is an NLP practitioner and certified hypnotist as well as an amateur philosopher. The author and his wife, Christine, live on the island of Martha's Vineyard, MA. 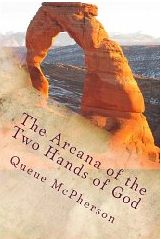