The Art of Human Salvage Will Now Be Released on August 9th, 2015

"When I read the feature film script written by Ted Dewberry, I was blown away. I knew I wanted to make this movie, and needed to start with a short to introduce this dystopian world to my audience," says Dempsey Tillman, the director and highly accomplished filmmaker.

The Art of Human Salvage is a short film shot in the steampunk style, set in the near future when a mystery corporation replaces government, free speech is a serious crime, and photography is punishable by death. The film's premise revolves around a ten-year-old boy who needs a Salvage Officer to rescue him from impending execution. The mood of this exciting film resembles a mix of Blade Runner and Children of Men, with its own original steampunk interpretation.

"There are many aspects of this film that any Sci-Fi fan will enjoy. It is impossible to just pick one," Tillman says. While the film is a visual thriller, Tillman's artistic direction and a veteran cast are other exciting reasons Sci-Fi fans should be greatly anticipating this release of this short. Tillman is best known for, Collector, which starred the late Brad Renfro and received over 27 film festival awards. Additionally, this film stars legendary actor Edward James Olmos (Battlestar Galactica, 2 Guns, Bladerunner), Jamie Walters (Beverly Hills 90210, Shout, The Heights), and Matthew Boylan (Straight Out Of Compton, 24, CSI).

Tillman says, "Shooting this short film gives us the opportunity to wet our audience's appetite. After watching it, I need them to want more, to see it made full tilt as a feature length film."

More information about this Dempsey Tillman Film and the official teaser trailer can be found on Vimeo: http://vimeo.com/134301104, Facebook: http://facebook.com/theartofhumansalvage, and YouTube: http://youtube.com/watch?v=AB8QRRcS8DE 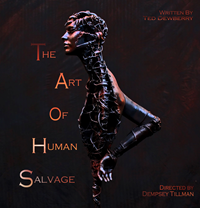