Los Angeles, CA -- (SBWIRE) -- 02/25/2014 -- Mouseketeer to worldwide singing sensation is not an unusual story, is it? After all there’s a Disney assembly line for these music careers, churning out similar artists like Britney Spears, Christina Aguilera and Justin Timberlake. Being the first African America ingénue to be cast as a series regular to the Mickey Mouse Club, groundbreaking! Here’s where that story gets better!

Raquel Roqué Herring is unique in every way. When the mouse ears came off, fame came calling and Roqué signed with Giant Records/Warner Brothers. Roqué later moved on to A&M Records with John McClain, then eventually to Jimmy Iovine’s, Interscope Records. She worked with such legendary producers such as Christopher “Tricky” Stewart, Robin Thicke, Dave Hall, Bow-Legged Lou of Full Force. But following years of label dissolutions and mergers, Roqué’s long-awaited first album never came to fruition. So she took the decision to step away from the music industry as an artist.

Working behind the scenes, Roqué forged a successful career as a talent manager, handling actors, singers, writers and producers. With a seemingly happy personal life and a prosperous business, Roqué’s life was golden.

Then disaster struck in her personal life and Roqué lost everything in the most devastating and public way. The only thing holding her together was her Christian faith and her unwavering belief in God. That was enough! Her love of both traditional gospel music and funky Christian hip-hop continued to grow and she answered the call to create music again and she began to pen her own Christian songs.

The climb from the darkness has given us the gift of her amazing debut album, LOUD FOR CHRIST: Drown Out The Darkness, which is now available to download from iTunes.

LOUD FOR CHRIST celebrates God’s unconditional and unfailing love for humanity. Using twelve original and multi-faceted songs, Roqué demonstrates that a Christian belief will not stop you from getting hit by the trials and tribulations of life’s journey, but that God’s love will pull you from the wreckage and be your guiding light as you rebuild your hopes and dreams. Roqué’s became Praise and Worship Leader at her church Spirit Food Christian Center in Los Angeles led by Pastor Garry Zeigler though recently stepping down to focus on her LOUD FOR CHRIST ministry supporting those who may be struggling and to usher in this guiding light to others.

Appealing to both church congregations and individuals alike, LOUD FOR CHRIST contains catchy tunes, easy to sing melodies and scripture infused confessions of faith that remain on your mind and in your heart long after you’ve hit the stop button. Roqué has a gift for perfectly merging popular music, scripture and ministry to create a unique and amazing sound. Listeners will find their toes tapping, their hands clapping and their heads bopping at the unashamedly mainstream beats and melodies. LOUD FOR CHRIST truly feeds the spirit and heals the broken hearted!

Like the ebb and flow of the natural tides, Roqué’s life has had its fair share of significant moments – some were thrilling, some were frightening and some were simply beautiful to behold. But LOUD FOR CHRIST represents the anchoring role that Jesus has in the life of this compelling songstress and demonstrates that she has learnt that nothing is impossible when God is by her side.

So join Roqué on her musical journey of Christian songs as she takes the gospel music industry by storm in 2014. You won’t regret that you did!

Roqué’s LOUD FOR CHRIST is available now on iTunes at http://bit.ly/14oapcq.

About Roqué
Roqué is represented by 3R Entertainment Group, a leading entertainment company based in Los Angeles that brings together distinct expertise in the areas of Talent Representation, Artist Development, Film and TV Production with a clear understanding of brand strategy. Contact them on 310.295.0111 or email Rebekah Behar at info@3rentertainment.com for interview and booking requests 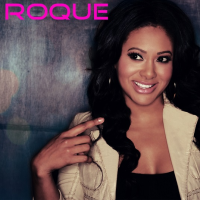