The Bishop of Banja Luka, Franjo Komarica Visit to the United States of America

The Bishop’s lecture, titled Bosnia and Herzegovina: Lessons from the past and possibilities for the future is moderated by John Carr, IOP Fall 2012 Fellow and it will discuss the role of the Catholic Church in prevention of genocide.

In light of recent events in Palestine and Israel, and recent acquittal by the war crimes court in The Hague the Bishops lecture will have a significant impact. The Bishop will also talk about the struggle of ethnic minorities in Bosnia and Herzegovina, even now, 17 years since the Dayton Peace Accords officially ended the most violent European war since the World War Two. For this reason the Bishops lecture will share lessons learned from the ethnic and religious conflict in the Balkans: How the peace was attained and the necessary prerequisites for lasting peace.

The Bishop with also meet with the State Department’s Office of International religious Freedom on Tuesday, Dec. 4th and a day earlier His Excellency will have a luncheon at the bishops conference, with Ms. Virginia Farris, lobbyist for Bosnia and Eastern Europe, Fr. Ronald Roberson, expert on interreligious affairs, and Walter Grazer who did a lot of work for bishops conference in Bosnia prior to 2007. Msgr. Ronald Jenkins, general secretary, will attend the luncheon as well.

Also on December the 4th, The Bishop will meet with His Eminence Donald Cardinal Wuerl, Archbishop of Washington. His Excellency is also expected to meet with The Congressional Caucus on Bosnia, The Congressional Caucus on Central and Eastern Europe and The Central and Eastern European Coalition (CEEC) and with several Bosnian and Croatian dignitaries in the Harvard Club of New York.

Distinguished guest’s visit was organized by the Office of National Collections, the U.S. Conference of Catholic Bishops, The Diocese of Banja Luka and Mr. Drazen Komarica (MPA), alumnus of Harvard University’s prestigious J.F. Kennedy School of Government, a Croatian born American scholar, indefatigable in his efforts to help Croats and Croatia.

About the Bishop Komarica:
Monsignor Komarica had been tirelessly committed to the survival of the Croats in the Serbian Republic and a just solution to the future of the people of Bosnia and Herzegovina. Holy Father, Pope Paul II asked the Bishop to organize His Holliness’ visit to Banja Luka that occurred in 2003. The next year, His Excellency Komarica was nominated for the Nobel Peace Prize and just a year later he was a recipient of the prestigious Franz Werfel Human Rights Award. 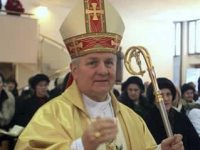