Having spent a quarter of a century as a charter bus driver, Chris Lancaster has met every cross-section of society. From lunatics and celebrities to sick people and even Presidents, Lancaster’s debut book buckles readers up for the journey of their lives.

Aurora, CO -- (SBWIRE) -- 07/18/2012 -- After spending twenty five years in the same office, most people are declaring war on everyone they work with. Thankfully for Chris Lancaster, his ‘office’ was always on the move and carrying a myriad of enriching characters. Now, for the first time, Lancaster steps on the gas and bares all for his new book.

"The Bus" Clowns; Jackass’s; and Good People is a collection of true stories and quirky interactions with the people Lancaster met and drove during his career. Including quips from celebrities, Presidents, rock stars, crazy people and just about everyone else – the author’s stories of a million miles on the road are entertaining people around the country.

“I have the most remarkable stories of what it is like to work and interact with the travelling public,” says Lancaster, who admits to having put up with just about everything life (and his passengers) have thrown at him.

He continues, “There are horror stories, accidents, near-misses and details of everything else that goes along with being a Charter Bus Driver. Sick people, crazy people tragedies and happiness all played a part in my career, which was always under the microscope of the public.”

The book is proving hugely popular among those who frequently travel by bus, as well as those who enjoy the dirt being dished on celebrities and diplomats.

“The book is also interesting to those who wonder what can happen in an accident that involves a Charter Bus. While it’s every passenger’s worst nightmare – it happens all of the time,” Lancaster adds.

Delivered as a first-hand account from an industry expert, many are praising the book for driving home the shocking truth about what the public are truly capable of.

“I share some fascinating stories about the lengths people will go to in life. This includes rich people playing the most awful practical jokes and some feisty encounters with the off-stage personalities of a number of well-known celebrities”, Lancaster says.

In all – the book will interest anyone who has an obsession with busses, travelling, celebrities or seeing the world through the eyes of the world’s most patient bus driver!

"The Bus" Clowns; Jackass’s; and Good People is available now in both Paperback and Amazon Kindle formats.

About the Author: Chris Lancaster
Chris Lancaster lives and in Aurora, Colorado. Following twenty five years as a Charter Bus driver, Lancaster is now happily retired, and focusing his time on his work as an author. 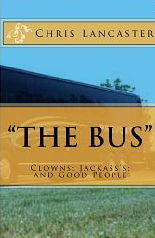