Miami, FL -- (SBWIRE) -- 03/14/2018 -- The Robert V. Glaser Giving website is a showcase of the many years he has spent giving back to the community and contributing his time to various charities, foundations, as well as his own personal causes like the Mary Louise Bates Scholarship Program, named in honor of his mother. The scholarship provided financial help to children with dreams of attending Rochester, New York's Maplewood Family YMCA.

In addition to learning more about the charities and foundations, website visitors can read more about Glaser himself and his illustrious career, including his many years working as an original senior management team member of Investcorp.

About Robert Glaser
Born and raised in Rochester, New York, Robert V. Glaser has amassed over forty years cultivating his banking and private equity experience. This experience extends to commercial banking, United States foreign direct investments, corporate acquisitions and divestments, the arrangement of bank and subordinated debt financing, and overseeing management teams of operating companies through the board of directors. Glaser has also worked abroad extensively, especially in Europe and the Middle East. During his life and career, Glaser has been to more than thirty different countries.

Mr. Glaser worked with The Chase Manhattan Bank, N.A. for more than ten years. After his training, he originally focused on Chase's domestic middle market corporate lending group. His clients consisted of oriental carpet importers, distributors, art galleries and restaurants such as Tavern on the Green, Maxwell's Plum, the Russian Tea Room and Benihana of Tokyo, to name a few. Glaser would move on to Chase's international department and settled in the Middle East, living in Bahrain and traveling the region, particularly to Abu Dhabi, Dubai, Kuwait, Qatar, Saudi Arabia, Oman, and Yemen. In the beginning of his assignment, he was responsible for Chase Manhattan's relationships with several Middle Eastern governments and he marketed units of those governments to achieve lending and investment opportunities. He was also in charge of Chase's political and economic risk analysis for those countries. Glaser eventually ran Chase's business with financial institutions - Central Banks, Ministries of Finance, investment firms, insurance companies and commercial banks in eight countries.

Robert Glaser's charitable endeavors include the homeless assistance Chapman Partnership, the nonprofit St. Thomas University, and the National YoungArts Foundation. He was a board member of the Peter S. Castle Foundation, a Rochester, NY charity that raised funds to assist underprivileged children in honor of his late close friend and high school classmate Peter Castle. 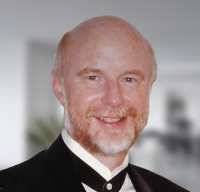