The Console Doctor Is Pleased to Announce That It Has the Largest Selection of Power Supplies for the Xbox 360 and the Playstation 3.

The introduction of video-games has changed the way games were ever viewed. While the debate continues on the risks and benefits of video-games.

New York, NY -- (SBWIRE) -- 10/01/2012 -- The introduction of video-games has changed the way games were ever viewed. While the debate continues on the risks and benefits of video-games, the fact that cannot be denied is that this format of the game is very interesting. However, the real pleasure and fun of video-games depend upon the system on which it is played. The better and efficient the game console would be, the better the gaming experience would be. To ensure such fantastic game experience, developers have produced some excellent consoles too, the most famous being Sony Play Station and Microsoft Xbox. Moreover when there are consoles, there have to be power-supplies too. This is where Console Doctor plays a role with its biggest array of PlayStation 3 (PS3) Power Supply and Xbox 360 Power Supply.

While on one hand consoles support video games, on the other they tremendously depend upon the quality and efficiency of power-supplies. In fact, improper power-supply may corrupt or break down the system. The resolution to this issue lies with the availability of power-supply cables (generally referred to as only power-supply). If searching for appropriate power-supply is tough, which it really is, Console Doctor is the easy way out for game enthusiasts. Although console Doctor has almost everything that can be required to support or enhance video-game experience, it specialises in Xbox 360 Power Supply and PlayStation 3 (PS3) Power Supply.

Apart from power-supplies, console Doctor also hosts illustrations and error-code explanations to allow its visitors with better understanding power-supplies. There are 3 types of Xbox 360 Power Supply, the diagrams of all three of which are available at the site to be matched by users before purchase. These are Xenon/Zephyr 203W, Falcon/Opus 175W and Jasper/Valhalla 150W. The Xbox Slim Power Supply is available too. In case of unawareness, 203W power-supply is suggested to be purchased for its universality. The price of Xbox 360 Power Supply varies from $21 to $31. The error identifiers mentioned at the site are Green, Orange or Red or no light at all meaning ‘powered-on’, ‘stand-by’, ‘power supply error’ and ‘no power’ respectively. 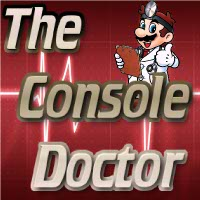