About Daniel NYC
Chef Daniel Boulud started the restaurant “Daniel” nearly 2 decades ago in the heart of Manhattan's Upper East Side in New York City. The restaurant offers a contemporary French cuisine inspired by the rhythm of the seasons.

Not long after it opened, Daniel was rated one of the top 10 restaurants in the world by the International Herald Tribune. Other awards include Gourmet Magazine's Top Table Award, a four-star rating from the New York Times and three stars from Michelin, the book's highest rating.

To this date, Daniel NYC remains one of the most sumptuous dinning experiences. A three course prix fixe dinner with wine pairings is priced at $176 plus gratuities. Not exactly a lean price tag even in good economic conditions but “worth every penny” as reported by several food critics over the years. 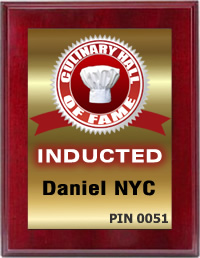