The Devil's Serum: New Book Tells of One Man's Struggle With Immortal Acceptance

After drinking the unknown contents of an ornate flask, Christian Laurent becomes immortal. However, at what cost does this most unusual privilege entail? And will he be accepted by the one he loves? Writer Ashliegh Wolfgang tells all in his compelling new book.

Crystal Lake, IL -- (SBWIRE) -- 09/25/2012 -- Many will know Ashliegh Wolfgang as the former singer of acclaimed recording artists, The Orphan Punks. However, swapping his microphone for a pen, Wolfgang is now releasing a compelling series of fiction books.

The first, ‘The Devil’s Serum’, tells tales from the journals of protagonist, Christian Laurent. Aged forty, Laurent drinks the unknown contents of an ornate flask, later waking up to find that he has been transformed into something more than human.

Having lost the functions of thirst and hunger, and possessing amplified strength, Laurent quickly learns that pain is no longer registered and any wounds rapidly heal. In short, he has become immortal.

However, being afforded this privilege is not without its costs. Having just fallen in love with Corrine, the love of his life, Laurent knows he cannot share his immortality, instead treating it as a curse. With just the flask’s engraved markings as clues, he tries in vain to understand what he has become, and why.

“It’s certainly a compelling story,” explains Wolfgang, who is making his first leap into the world of published literature. He continues, “The book is the first volume of ‘The Ramblings of the Damned’, a Novella series that will be five volumes strong by the end of this year.”

Critics praise Wolfgang for his ability to bring the literary flare from yesteryear to a modern-day audience.

With so much success in his hands, Wolfgang refuses to lose sight of the most important facet of his works – the books’ original plots.

“The Devil's Serum is a supernatural love story for literary fans above the tween scene, and proves that a supernatural story doesn't need fangs to have bite,” he concludes.

His progress can also be followed on social media.

The Devil's Serum is his first foray into fiction writing, a love he has had behind the scenes for decades. Ashliegh claims writing influences from historical authors such Edgar Allan Poe and H.P. Lovecraft to contemporary authors such as Anne Rice and Clive Barker.

Ashliegh currently lives in the suburbs of Chicago with his wife Heather and children Addison and Samantha. 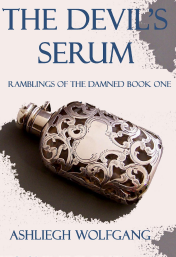