An Irish driver, Michael John Shields, was disqualified from driving in the UK for two years. Following the period of disqualification, he was stopped by Kent Police and told that his Irish driving licence was no longer valid in the UK.

Shields was taken to Kent Court in the south east of England, fined 3690 pounds and was prosecuted for driving while disqualified and without insurance, even though he had a valid Irish driving licence (European driving licence).

This incident took place, despite the ruling on April 26, 2012 by the European Court of Justice in Luxembourg that precludes the DVLA from refusing to recognise an Irish driving licence registered to an Irish national. The DVLA in the UK appears to be refusing to implement the ruling of the European Court of Justice from that day (Case no C419/10 Wolfgang Hoffman v. Bavaria).

This incident is causing many people to wonder how many Irish drivers have actually been stopped and arrested for their failure to implement the European Directive. Based on the recent incident involving Shields, it appears to many drivers that their European driving licences seem to be recognised by every country in the world except for the DVLA.

The DVLA appears to be breaking all of the European laws doing what they like; for example, arbitrarily throwing the book at scores of Irish drivers from the south, who have been forced to retake a driving test in England, Scotland Wales and Northern Ireland. This is completely unlawful following the ruling from the European courts. Also, when a non UK driver who holds a European licence is disqualified in the UK, it creates a second UK licence, which is illegal under European law. The DVLA will force the driver to take a driving test in the UK, although what they are doing is completely unlawful. These Irish drivers should be able to sue the DVLA in the UK for making European nationals retake their driving test in the after their period of disqualification has ended. 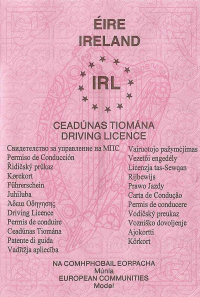