The Ensuite Life: Whimsical New Book Urges Adults to Pack Their Bags and Trot the Globe

Having traveled abroad earlier in his life, Michael Barmish had a blast. Now, slightly older, wiser and with an accepted demand for creature comforts, Barmish offers both inspiration and advice to those non-youngsters who want to spread their wings and see the world.

North Hollywood, CA -- (SBWIRE) -- 11/27/2012 -- Michael Barmish is no stranger to traveling the world, having journeyed as a young man to see what global culture had to offer. However, with an urge to do it again while maintaining a career, Barmish is now happy to admit that comfort and accessibility are among his top priorities. Wanting to share his stories as well as inspire others to travel the world, Barmish is delighted to announce a compelling new book.

‘The Ensuite Life: Traveling the World and Avoiding the Toilet at the End of the Hall’ is as funny as it is valuable. In fact, the book is poised to become a must-have for those who want to see the globe while taking advantage of as many affordable amenities as possible.

“We were young and carefree, traveling solo with a pack on our back and sharing a room with seven other people with the toilet in the hallway. It was clean. Or, at least it was at eight o'clock in the morning before anyone used it. But we didn't mind. We were seeing the world.

That was then, this is now. Traveling the world when you are no longer a kid out of school and well before being ready to retire is a whole different ballgame.

The Ensuite Life is for the rest of us. We have the freedom to move around but still must work for a living. We want to travel the world but sleep in a comfortable bed. Mixing tips and advice with humorous anecdotes, this book will inform, engage, and entertain. And hopefully give encouragement to make the leap and take that trip around the world.”

Barmish’s route took him from the Cook Islands to eight countries and eventually back to the United States. However, while planning a trip at his current age, he found a lot of published information lacking.

“One of the main reasons I wrote this book is that I found a lot of information on round the world travel geared towards those who are just out of school, taking a gap year or after retirement. But for those of us who have to work and have the opportunity to travel, there wasn't as much practical information,” Barmish explains.

He continues, “So I decided to write a book that combined tips and advice based on my experience along with humorous anecdotes of my travels.”

It would appear that the book’s value is already being recognized by its readers, with rave reviews flooding in from across the country.

For example, reader Jon Bastian said that, “I think that's the key take-away from this book. Here's somebody who has been there, done that, and who is willing to share priceless and necessary information that will keep other world travelers out of trouble. Whether you're planning a journey around the world or just to another continent, this is probably the best reading material to stick in your carry-on and refer to constantly.”

He added that, “Zagut and Fodor can only get you so far. The Ensuite Life will take you much farther, and it's like having a local (or a very experienced friend) in your pocket. Correction: a local, experienced, and really funny friend in your pocket. And what more could you ask for when visiting a foreign land?”

With so much success on his hands, could the work of Barmish flourish a new generation of travelers that aren’t afraid to enjoy life’s finer things?

‘The Ensuite Life: Traveling the World and Avoiding the Toilet at the End of the Hall’, published by CreateSpace, is available directly from the publisher as well as through Amazon.

More information can be found on the book’s official website: http://www.ensuitelife.com/

About the Author: Michael Barmish
Michael Barmish was born and raised in the Philadelphia area and graduated with a Bachelor of Arts degree from Temple University's School of Communications and Theatre. After moving to Los Angeles to pursue a screenwriting career, Michael was hired for several projects, including the family film, Kid Cop, which has aired on HBO and ABC Family networks, and was the featured film in the KidFest film festival. Michael is a member of the Los Angeles Writers Center and continues to write plays, screenplays, and freelance web articles. Recently his comedy screenplay won first place in the 2011 Holiday Screenplay contest. His love of travel and writing will no doubt lead to further adventures of The Ensuite Life. 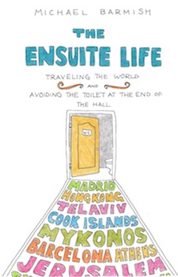