The Evolution of Wealth: New Book Examines the Success and Distrust of Capitalism

Jerry D. Ward’s new book recounts the historical progression of innovation and the evolution of our economic system.

San Diego, CA -- (SBWIRE) -- 08/06/2012 -- In a nation where ‘we the people’ are responsible to choose an economically competent Government, author Jerry D. Ward believes that few understand the purpose of free-market Capitalism, nor why it is important. In his new book, Ward sets out to explain why the Western World is so wealthy at a time when half of the world’s population would be grateful to live at our poverty line.

The Evolution of Wealth: An Economic History of Innovation and Capitalism, the Role of Government, and the Hazards of Democracy recounts the ten thousand year evolution of the capitalist economic system.

It illuminates why, after thousands of years of almost no material improvement in most people’s lives, the last 300 years has produced the abundance the capitalist nations enjoy today.

“Capitalism allows creativity and enterprise to be turned into wealth,” Ward explains.

The book also explains why, in spite of capitalism’s clear success, it is so disliked, mistrusted, and misunderstood by so many people. He adds, “But remember, capitalism is not in competition with Heaven, just with all the other economic systems known to man.”

While Ward’s points apply to most developed Western countries, he chose to keep the book’s focus on the United States. This narrow emphasis plays an important role on the book’s second facet – the issues in the nation’s continuing evolution.

“I discuss some of the trade-offs involved in governing, and specifically why the political system encourages too much spending, too much debt, and an inability to restructure commitments that have runaway costs. It presents options to alleviate these shortcomings,” adds Ward.

For example, one chapter is devoted to the development of a new and potentially much more effective approach to K-12 education.

This is a short, lean book—just long enough to tell the essential story of the evolution of wealth and to convey a broad understanding of how the U.S economy works, its problems, and fruitful directions for its future evolution.

Here is one review of The Evolution of Wealth:

“If I could write a book for my children and friends on how capitalism evolved and the choices we face this would be the book I would have loved to write. The book is short only 134 pages and a fast read but it is packed with good information. I would compare it to the writings of Thomas Sowell clear, concise with well-reasoned arguments. Our country would be in better shape if everyone read this book and we took the authors suggestions on how to get out of our current situation,” says Donald Schwartz, who published his review on Amazon.com.
The Evolution of Wealth: An Economic History of Innovation and Capitalism, the Role of Government, and the Hazards of Democracy, published by Del Cerro Publishing, is available now from Amazon.com.

About the Author: Jerry D. Ward
Jerry D. Ward is retired and lives with his wife, Penny, and their two poodles, Britain and Paris. He says that for years—usually with friends and helped by a bit of wine—he puzzled over the question of why, for thousands and thousands of years, very little seemed to change in terms of the material lives of average people, then all of a sudden there was an Industrial Revolution and now we are all rich—at least relative to non-capitalist nations. And now that we are, why do we have so much trouble governing ourselves, and what are the root causes of our current difficulties. After a lot of reading and a lot of thinking, out came this book.

Mr. Ward has a BS in Physics from Caltech and a Masters in Business Economics from UCLA. Politically, he is an Independent. 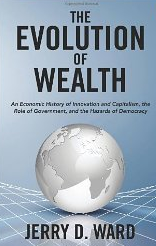