Seattle, WA -- (SBWIRE) -- 06/04/2013 -- While it started out as a fantasy/adventure bedtime story for her young nephew, Marjorie Young’s ‘The Boy With Golden Eyes’ series quickly received overwhelming praise from friends and family. Three years after giving into pressure and releasing her saga to the world, Young boasts an award-winning literary series with fans spanning the globe.

‘The Fate of Raja-Sharan’ is the series’ latest volume, due for release this coming June.

Guided by mysterious visions, young Rupert at last arrives in the fabled realm of Raja-Sharan. Extraordinary events await him, including a stunning reunion with his cryptic grandparents. Shunning their dire warnings, the Golden-Eyed Prince vows to deliver his royal cousins from overthrow at the hands of a menacing visitor, Prince Jezra.

With his comrades imprisoned, Rupert faces the looming calamity alone. To thwart the would-be usurper, he devises a daring scheme that, instead, causes him to be ensnared by his foe. At Jezra’s mercy, Rupert endures shattering allegations against his revered heritage, shaking the boy to his core. Yet summoning a valiant resolve, Rupert engages in a deadly duel to determine the fate of the kingdom.

‘The Fate of Raja-Sharan’ weaves a web of revelation and intrigue around Rupert’s captivating saga, bringing challenges as never before. The charismatic youth confronts treachery, transgressions, and the spell-binding temptations of power – while an unrelenting destiny delivers life-altering tidings that may overthrow his world forever.

As the author explains, her narrative is so compelling that even she feels ‘led’ while writing it.

“It’s a hard thing for an author to explain – but while writing, I often have no idea what will unfold from moment to moment. Events reveal themselves to my complete surprise and, while readers compliment my intricate plotting, it’s as if the book is almost ‘channelled’ through me,” says Young.

Continuing, “The series differs from most fantasy and adventures as it features neither wizards nor dragons. Instead, its 12th century setting is still ‘down to earth’ and focused on real-world danger. Coupled with the story’s psychic/spiritual themes and breath-taking young hero, a powerful literary cocktail awaits every reader.”

Reviews for the series’ previous volumes have been nothing but glowing.

“This is the book I have wanted to read! The sentences made me feel as if I'm watching a movie!! Adventures, friendship, family love, and what comes next?” says Rika, reviewing the first instalment on Amazon.

Another reader, Aziza, was equally as impressed with the second book – adding, “There is non-stop action and suspense...I never could guess what might happen next. It was wonderful to 'reunite' with Rupert and his friends, and the cast of new characters certainly provided a vivid and riveting addition to the story. I was amazed at the surprise ending, and am already impatient to read the next instalment”

While she has achieved an unforeseen measure success, the author refuses to lose sight of what is truly important.

“It’s all about the story itself. Rupert and his saga are imparting many positive life-lessons on readers of all ages. It teaches that, no matter how dire the circumstance, unknowable forces may be working to serve a greater good. I can’t wait to see where the next three volumes take us!” She adds.

‘The Boy With Golden Eyes: The Fate of Raja-Sharan’ is due for release in June. Existing books are available here: http://amzn.to/ZtxKsy

About the Author
Marjorie Young is a mystically-inclined world traveler, spiritual counselor, and a lover of the world's myths and cultures. She currently resides in Seattle, Washington, and is a columnist for the Ballard News Tribune. 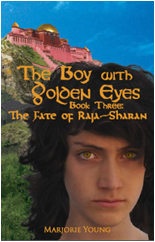