Written by Bob Gammon, ‘The Good Knight’ uses an uplifting story of courage, perseverance and friendship to help children never lose the fight to achieve their dreams. While also promoting good character and positive friendships, the book is poised to resonate with children around the world.

Memphis, TN -- (SBWIRE) -- 09/24/2013 -- In a society marred by ongoing pressures, modern technology and negative media, many adults relish their memories of childhood innocence. However, a powerful new book by Bob Gammon ensures that children grow up never giving up on their hopes and dreams; acting as a powerful catalyst for a bright future.

‘The Good Knight’ using its charm and whim to drive home a positive message that will resonate with children from all walks of life.

The Good Knight" is the story of an old squire in the Middle Ages in England. His whole life he dreamed of being a knight.

He finally decided if he didn't go on a quest to slay a dragon soon, he would never get the chance again. Upon meeting a dragon named George, his dream comes true but not in the way he had imagined.

As the author explains, his book shares a number of vital life lessons with young children and their parents.

“It’s an enchanting fantasy story that will appeal to pre-school, kindergarten and first-graders. Children will learn a number of a very bold lessons including the importance of never judging people by their appearance, realizing that they are never too old to achieve their dreams and that they should never give up on getting what they want out of life,” says Gammon.

Continuing, “The book was purposely written to be utilized in settings ranging from bedtime to the classroom. It’s a great way to teach children about vocabulary and other language art skills.”

“At eleven pages, this letter-sized paperback booklet has a tall green dragon looking down at an old knight on a horse on the front cover. The back cover is a simple half gray and green background with two paragraphs about the book and author. Illustrator Dwain Esper creates large, simple drawings that follow the short storyline. Dedicated to those serving in the United States military, the book is about perseverance and completing a goal, even if it is later in one's life. With no profanity or scary scenes or storyline, the tome is geared toward preschool to kindergarten aged children,” says one reader, reviewing the book on Amazon.

Margaret A. Tolbert was equally as impressed, adding, “My son loves this story! The pictures are engaging and the message behind the story is great. This is a good book for both class rooms and the home.”

‘The Good Knight’, published by AuthorHouse, is available now: http://amzn.to/19t1hCw, Amazon and Barnes and Noble.

About Bob Gammon
Bob has lived in the Memphis area most of his life and taught in public schools for 35 years. He and his wife, Eve, are highly involved in their church and in Carnival Memphis. He is a proud father and grandfather. As Founder and Principal Consultant for American Disabilities Consultants, Inc., Bob works with businesses and government entities to help them provide accessible goods and services to citizens with disabilities. 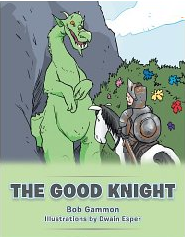