Bridging the multi-cultural gap between two youths travelling in the Outback, Anita Melillo’s new novel proves that everyone’s background has significance and meaning. Exploring themes of social values, beliefs and the power of relationships, the book is set to resonate with readers around the world.

Bailey, CO -- (SBWIRE) -- 02/25/2013 -- From social masks to cultural molds, everyone’s background and customs plays a heavy influence on how they perceive the world and others. However, in her compelling new novel, Anita Melillo takes readers deep into a story of cross-cultural acceptance. It’s proof that everyone’s values are important.

‘The Great Empty’ takes its characters out of the bustle of everyday life and into a setting where basic friendship and understanding is a key tool to survival.

When a rebellious youth named Donovan leaves his home in Europe for a family trip to Australia, he quickly determines another course when he takes advantage of an opportunity to seek out adventure of his own. While slipping away from the care of his guardian and sister at the airport in Darwin, he decides to take a tour bus to a Crocodile Farm, which inadvertently continues to take him hundreds of miles deeper in the outback and into Kakadu National park. His curiosity continues to get the best of him, when he sets off on foot to explore a trail to a waterfall and plunge pool. One mishap leads to another until he finds himself alone in the dark and unprepared to face the unknown that envelopes his surroundings. Once he discovers that he is lost, he continues to make his way through the bush, but not without its perils. Eventually, he befriends an Aborigine boy named Neji, who is on a journey into manhood. Together they fight against the elements and the mysteries of the dark, with beliefs and rituals as deep as the Dreamtime. All the while, a peculiar stranger continues to shadow them for unknown reasons. Pretty soon, Donovan finds himself on an unexpected course with this deliberate Swagman, with his harsh ways and cruel intentions. Without warning, Donovan is forced to use all that he has learned, in order to survive this downward spiral that seems to be leading him nowhere, with his only hope of making it back to civilization again...

As the author explains, her narrative sees multiple themes at play.

“The story has significance because it bridges a multicultural gap between two youths, one of a privileged European upbringing versus the simple livelihood of an Aborigine boy, who enjoys the natural boundless wonders of the land. When they are journeying through the outback on this ritual into manhood, money doesn't account for much. There are no social boundaries that divide them as bonds are created and trusts are formed, while they learn to live off the land for survival. Life begins to take on a new meaning in ways previously unknown to them beforehand,” says Melillo.

Continuing, “Misconceptions regarding beliefs and social values are also brought together in a non-judgmental way showing that everyone's culture has significance and meaning, even if it is different from the norm. The novel also has character layers that demonstrate why people react the way that they do and why they choose to settle for particular plots in life, while there is always room for hope and change.”

Critics praise the author for her unique style of writing; tackling vitally important issues through humor, drama and feel-good imagery. With the book’s popularity expected to rise, interested readers are urged to get their hands on a copy as soon as possible.

‘The Great Empty’, published by the author, is available now: http://amzn.to/UMbqH7

About Anita Melillo
Anita Melillo lives with her husband Tony and their two dogs, in the mountains of Colorado. They have four children at different stages of independence. Anita has a nursing career and is a volunteer firefighter in the town she resides in. She loves the great outdoors and has always had a passion for writing. 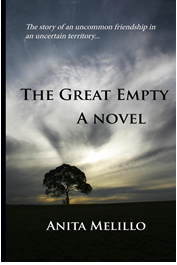