With an upcoming featured track on WiFi PR Group’s Indie Anthems Vol. 5 and a new full-length album in the recording studio, The Hard Luck is poised to bring their soulful rock & R&B sound to a new level and share it with fans across the globe.

Las Vegas, NV -- (SBWIRE) -- 03/26/2014 -- Soulful rock with R&B influences and a pop sensibility keeps The Hard Luck at the top of their game in the Minneapolis, MN, music scene. They’ve already had many opportunities open up to them thanks to this rich sound, including spots opening for some impressive national acts and the inclusion of one of their tracks on WiFi PR Group’s Indie Anthems Vol. 5.

Nathan Santos takes the helm of the group on lead vocals and guitar. He is surrounded by talented musicians who allow him to create a sound that is as smooth and soulful as it is energetic and bright.  These musicians include Dennis Kamp on lead guitar, Clarence Cole on bass, Christopher Zator on drums and John Mika on keys.

As a whole, the group has been compared to the likes of Dave Matthews and Marshall Tucker depending on the song. When they play their smoother R&B tracks, they are also compared to Jamiroquai and Bill Withers. This sound has been informed by a wide range of musical influences, from R&B artists like Stevie Wonder, Otis Redding and John Legend to rock artists like Third Eye Blind, Deftones and Red Hot Chili Peppers and blues/folk rock artists like John Mayer, Martin Sexton and Nick Drake.

As far as inspiration for lyrical content, Nathan most often looks to social and internal/ego issues, such as the battle of finding a sense of self and purpose. His music seeks to convey concepts like the idea that the world or humanity is in shambles but the lives everyone shares together can make it all worthwhile. He finds inspiration in struggle and the push and pull of everyday restlessness.

These varied influences and inspirations have resulted in a sound that is all their own. You can hear examples of this on their recording debut, the Grind EP (2012). Moving forward, they are currently in the studio recording a new full-length album which is set to be released in fall of 2014. “We’re very excited about the new material on this record,” said Nathan. “The songs have really come together well and the band sounds tighter than ever.”

A few of The Hark Luck’s most notable accomplishments include winning the battle of the bands that resulted in their performance at the Cities 97 Basilica Block Party. They’ve opened for such big name acts as The Plain White T’s, Anthony David and G Love and the Special Sauce. They’ve also shared the stage with national artists like Matthew Santos, Dessa Darling and The New Congress.

Joining a host of other international talent spanning a wide range of genres, The Hard Luck will have their track “All I Wanted” from the Grind EP featured on WiFi PR Group’s compilation, Indie Anthems Vol. 5, set to be released at Coachella in April 2014. The digital mixtape will be handed out on 3,500 download cards to festival attendees, and another 1,500 copies will be made available on the Indie Anthems Bandcamp page.

In addition to this compilation, The Hard Luck has already seen successes with licensing their music as well through working with Tinderbox. They are currently licensed with Fox Sports, Nascar, NFL Films and others.

If you would like to catch The Hard Luck live, they will perform at Pub 112 in Stillwater, MN, on March 22nd and April 26th and at Gluek’s in their hometown Minneapolis, MN, on April 12th, May 9th and June 7th.

You can purchase their music at these shows, and you can also find it on iTunes and Amazon should you want to take their sound home with you. Also check out the live in-studio video for their track “Roam.” 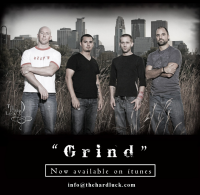