The Highlife Band Aims Higher with Their Successful Sophomore Album, What's to Come

With their latest album, What’s To Come, The Highlife Band reaches for new heights and expands their horizons to produce a record that gives their fans something to talk about.

Las Vegas, NV -- (SBWIRE) -- 01/02/2014 -- Seattle may not be readily known for its reggae bands, but The Highlife Band are a homegrown collective of talented musicians with worldly visions of music. Bound only by their imaginations, this group has enjoyed local and national success through tours and album sales and promotion, and they plan to plant one foot still more firmly in the reggae world with their sophomore album, What’s To Come (2013).

The Highlife Band is often compared to other popular and more mainstream reggae artists, such as Steel Pulse (one of their chief influences), The Green and Slightly Stoopid. Their other musical influences lie with such artists as Bob Marley, Burning Spear, Marvin Gaye, Curtis Mayfield and Chucho Valdez. You can hear brushstrokes of these artists on various tracks from the group’s latest release.

The band has been fleshed out to round out their memorable sound and now includes backing vocals, horns and keyboards for greater depth. Band members include Daniel Miller (lead vocals, guitar, songwriter), Ras Mikeli (drums), Dylan Hughes (bass), Minami (vocals), Brian Woolford (keyboards), Brandon Hunter (trombone), Tschuai (trumpet), Randy Reed (percussion) and Tasha (vocals). The recent additions not only complement the music they’ve already written, but they improve upon it by adding flashes of color here and there to make them stand out in an otherwise crowded genre.

Lead singer and songwriter Daniel Miller taps into inspiration from all angles of life—from the bigger picture behind mundane, everyday occurrences to overcoming adversity and injustice. His songs examine how to deal with being discriminated against because of class or economic status as well as handling heartbreak and keeping a relationship together. Above all, there’s an underlying message of unconditional love, self-contentment, self-love and internal peace.

With their latest album, What’s To Come, The Highlife Band reaches for new heights and expands their horizons to produce a record that gives their fans something to talk about. From carefully stylized beats to poignant, meaningful lyrics, this album is a sophomore effort that demonstrates both the musical capabilities of each musician and the complex but well-developed unity formed through their individual efforts.

On What’s To Come, you’ll find no recycled rhythms or samples—everything is original and from the heart. Going through the album, you’ll enjoy influences from dancehall, bif-baf, rockers, cumbia, one-drop and steppers beats—a collection of genres sure to turn the heads of any reggae lover.

Check out their official music video for “D&D (Never Take My Rights)” hot off the new album. The song strikes a great balance of upbeat melodies with laid back rhythms and smooth lyrics, topped off with bright horn lines and a bold guitar solo. The track will be featured on WiFi PR’s Indie Anthems Vol. 4, to be released at SXSW 2014.

You can catch The Highlife Band live at one of their upcoming hometown performances. They’ll be intoxicating crowds at Thomas O'Neil Cellar in Richland WA on Saturday, November 8, 2014. When they’re on tour, you can find them performing throughout Washington, Oregon, Idaho and Northern California.

You can listen to and buy their music from iTunes, CD Baby, Amazon, emusic and their website. You can also find their music through catalogs, nationwide independent stores and also soon through Independent Distribution Collective.

About AudioBullet
AudioBullet based in Las Vegas, NV is an innovative marketing force in the interconnecting worlds of music and entertainment. Specializing in digital publicity and branding, AudioBullet is a full service boutique online PR agency and brand development company. 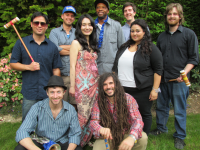