Fusing one man’s love for his family with his fight to remove them from a hell planet – can he prove that he is worthy of returning to earth?

Andrews, TX -- (SBWIRE) -- 08/16/2012 -- Steven Vaughn’s latest novel is a cocktail of the perfect story; a mixture of dark fantasy, love and enthralling action. With a compelling narrative to match, the title has taken the literary world by storm.

The Justicar tells the captivating ad heart-warming tale of one man’s struggle to rid them of the hell planet Nex, and return to earth. However, with all good stories weaving a series of trials and tribulations, the struggle for ‘home’ will not be easy.

Nex, the planet of evil, houses the worst criminals from Earth. The Justicar put them there to separate them from the few good people that remain.

Once every ten years the Justicar gives these outcasts a chance to redeem themselves. The Trials. Daniel, a member of the Coast Runners, believes himself worthy and enters the trials. He hopes to take himself and his family back to Earth. Can he prove his worth or is he doomed to the fate of his ancestors?

As the author attests, almost everyone can relate to a character from within the book.

“Young people will love The Justicar character, as he is only a fourteen year old boy. While they revel in his power and might, adults will see themselves in the character of Daniel; who tries against all odds to do what is best for the ones he loves the most,” Vaughn explains.

Since its release in May, the book has garnered consistent five-star reviews.

Critics praise the book for being a far cry from titles such as Twilight – with Vaughn’s work placing a solid focus on the real-world importance of love and family.

“Even though the characters have their memories wiped, they still remember who their family are, and their love for them never wanes,” he explains.

With all of its originality, suspense and boundless adventure, The Justicar is carving a literary niche all of its own.

The book is available now, from Amazon.com in both paperback and electronic formats.

About the Author: Steven Vaughn
Vaughn grew up in a small town just outside of Peoria Ill. Through his young years he had a knack for telling stories and writing song lyrics. In his late teen years he played in a band and went to college for art studies.

He has had many jobs taking him all over the US. One in particular was working on a line boat pushing barges up and down the major rivers. He have settled down a bit in my later years with a fantastic wife and two step children.

The youngest was his inspiration for the Justicar. She is extremely smart, but little common sense (typical 14 yr old). 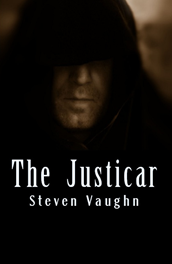