The Last Alignment: New Book by NC College Student Doubles Up as His Thesis

Having published a compelling new young adult/fantasy novel, one North Carolina college student has submitted his work as part of his Creative Writing Thesis.

Banner Elk, NC -- (SBWIRE) -- 10/09/2012 -- Most college students trudge through their thesis with budging eyes and haste. However, for one North Carolina college student, his thesis was the result of a passion for writing and an abundance of creative talent.

Nathaniel Stewart wrote ‘The Last Alignment: Book One’ to satisfy both his tutors at Lees-McRae College and a hungry band of young adult readers who demand new and exciting stories. Based on a compelling fantasy-based plot, the book is causing a buzz with both audiences.

Hektor has been dead for fourteen years, and he believed that all the chaos that existed had died with him. And now, he has returned, and while he doesn’t know how he has found his way back to the land of the living, he recognizes that the situation is far more dangerous and hostile than it was before.

Things have not only changed, but they have moved forward so rapidly that on top of everything else, he now has to deal with five teenagers and prepare them to do what those before them could not. But Awbrey, Hudson, Androse, Zander, and Natalye have a ways to go before they can come together and do anything, a daunting detail considering that Hektor doesn't know how far the enemy has gotten in his absence.

As the author explains, the book served a useful dual purpose.

“Since I was twelve, I have dreamed of being a published author and have readers appreciate and enjoy my writing the same way that I have enjoyed the work of others. Equally, I was in need of a great showcase of creative writing talent as part of my college course, so I decided to combine the two,” explains Stewart, who is currently selling his book not only on Amazon.com, but at all major eBook carriers including Barnes & Noble, and the Apple iBook Store.

He continues, “I must be one of the only students who loved writing their thesis. I enjoyed every second of the process. It didn’t feel like school work and it resulted in a fantasy book that can easily contend with other young adult books currently on the market.”

Since its release, ‘The Last Alignment’ has garnered a consistent string of five-star reviews.

“Stewart has done a wonderful job with this, and his brand of "fantasy" is very endearing and shows a lot of potential and promise (if done the right way),” says Delvon, reviewing the book for Amazon.com.

Another reader, Benjamin Storm, was equally as impressed and drew much inspiration from Stewart’s work.

“This book has inspired me to keep working on my novels so that one day I can publish them,” he wrote.

In fact, the response has been so huge that Stewart has recently announced that he intends to write four more books to complete the series.

“There is a lot more on the way. In fact, I am currently writing the next installment of The Last Alignment Series, which is exciting. My aim is to not only start my literary career, but to provide readers with an "escape from reality" just as many other authors before myself have afforded me,” he concludes.

‘The Last Alignment: Book One’, self-published by the author, is available now at all major eBook retailers.

About the Author: Nathaniel Stewart
Nathaniel Stewart is a Maryland native who is currently earning his Bachelors of Arts in English with a Concentration in Creative Writing and a Minor in Art at Lees-McRae College in Banner Elk, NC. He has been writing since the age of twelve, and “The Last Alignment: Book One” is his first novel. 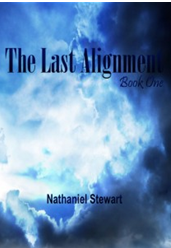