Written by Karen Matthews, ‘Legend of Lizard Lick: A North Carolina Folktale’ harkens back to the era of traditional storytelling in an effort to help children appreciate all that is great about the outdoors. While simultaneously promoting the important of friendship and kindheartedness, this unique book is poised to resonate with children and adults from coast to coast.

Sanford, NC -- (SBWIRE) -- 09/19/2013 -- In an age where the nearest electronic device is never more than three feet away, many literary critics fear that wholesome storytelling could be able to die a sudden death. However, a whimsical and inspiring new children’s book by Karen Matthews takes its cue from the folk tales of yesteryear; providing a story of strong moral, vivid excitement and rollicking outdoor fun.

This whimsical story starring a charming cast of frogs and lizards tells the story of how the community of Lizard Lick, NC, got its funny name. When young Carson asks his grandfather about it, Papa Richard responds that it happened during the great drought many years back. The lizards and frogs used to be friends until the drought came. After that, the lizards and frogs began fighting over the disappearing water in Sweetwater Pond. Battles were being fought until Coach Toad Runner suggested they hold a sports tournament to resolve the dispute.

It is a story that teaches children about friendship, forgiveness, and how to resolve disputes peacefully. It also inspires them to get outdoors to enjoy sports and look for those little critters that live in the grass, trees, rocks and water around them.

As the author explains, advances in technology should not stop children from discovering all that is great about the world around them.

“During the electronic age, it's important to remind children of the joys of reading a book or playing outdoors. Life is a lot more than computer games and gadgets,” says Matthews.

Continuing, “Children can bond with their parents and grandparents as they read a book together, and they can enjoy the company of family members and peers while breathing the fresh air outdoors, playing sports, or taking a hike.”

“This is such an amazing book and full of the most engaging, intricate illustrations that draw you in. Children and adults alike will spend hours poring over the pictures while becoming engrossed in the story of how the town of Lizard Lick got its name,” says one reader, reviewing the book on Amazon.

Bobbie was equally as impressed, adding, “The Legend of Lizard Lick is a fabulous children's book. My grandchildren loved it. The art work is unbelievably good. My granddaughter loved figuring out the different lizards and toads. She was captivated by the animals. Your children will love it just as much as we did.”

With the Holiday season approaching and the book’s popularity set to rapidly increase, interested readers are urged to purchase their copies as soon as possible.

‘The Legend of Lizard Lick: A North Carolina Folktale’ is available now: http://amzn.to/19XmXYi.

About the Author: Karen Matthews
Karen Matthews is a technical writer and the owner of Carolina Souvenirs (http://www.carolinasouvenirs.com), a company developing unique new souvenir products for the North and South Carolina tourist markets. She has a bachelor's degree in English from the University of Alabama. She lives with her husband, Richard, on a small farm in Sanford, North Carolina.

Her first book, "The Legend of Lizard Lick", is a whimsical fully illustrated children's book about how the tiny community of Lizard Lick, North Carolina (a real place), got its funny name..

Kirkus media says in their review "A wholesome, down-home children's book, with fine illustrations and a kid-friendly moral...The author's easy-to read, descriptive prose is accompanied by Taylor's beautiful watercolor illustrations that colorfully and wonderfully develop the story's world and characters. Frogs and Lizards are rendered in exquisite detail, with humanlike expressions, while still retaining their animal qualities and the backgrounds will give young readers a great sense of the North Carolina landscape." 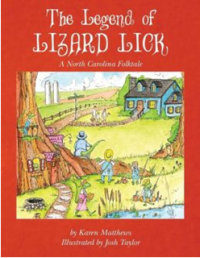