The Leopard Tree: Award-Winning Novel of Hope and Courage, Commended by President Clinton, Available for Free This Month

Having won a string of accolades for its attempts to raise awareness of the millions of Africans suffering from malnutrition, AIDS, Malaria and the atrocities of armed conflicts – the passionate authors of ‘The Leopard Tree’ announce free download dates this October

Fort Collins, CO -- (SBWIRE) -- 10/05/2012 -- Tim Merriman and Lisa Brochu have spent the past four decades helping others connect with global, natural and cultural heritage. The couple wrote ‘The Leopard Tree’ to serve as a vehicle that highlights the daily challenges many in developing nations face, just to meet their basic needs. Following critical acclaim and a series of prestigious awards, the duo today announced a series of Amazon ‘free book days’ from October 27th to 29th.

The book offers a real-life and thought-provoking plotline, which has resulted in over 25,000 downloads and a consistent string of five-star reviews.

Three orphans from Kenya embark on a desperate quest to meet the Secretary General of the United Nations in New York City and deliver a message they hope will help millions of homeless and hurting children in Africa. The Wonderful Wizard of Oz becomes their guidebook as they journey alone across the United States. The trio--one with HIV, one blind amputee, and one who hasn't spoken for years after watching her family slaughtered--find themselves embroiled in a situation beyond their imaginations as they get close to meeting their goal.

The Leopard Tree won the Best Young Adult Fiction Award in 2008 with Writer's Digest International Self-published Competition and a Third Place EVVY in the Fiction Division of Colorado Independent Publisher's Awards in 2008. Perhaps the most sentimental accolade is a personal note from President Clinton himself.

“This story was inspired by a TV Special about HIV in Africa with President Clinton. We sent him a book and received a personal note back stating, ‘Thank you so much for The Leopard Tree . . . what a creative approach to raising awareness of HIV/AIDS! I commend your efforts on this critical issue, and I wish you much success in your work’,” says Merriman.

He continues, “As you can imagine, receiving a personal note of approval from a globally-renowned philanthropist really solidified our goals and spurred us on to continue vital work that raises awareness.”

For those who cannot travel to Africa to experience the plight first-hand, The Leopard Tree offers a book-bound journey into the emotional story of three children. It ends with a poignant realization of the main character’s dream.

“There are 18 million orphans in East Africa due to HIV taking their parents’ lives. An orphan in Africa usually has no living relatives, for even a cousin would take in a child without parents. Our hope is that the success of this book will drive greater interest and support for African aid programs,” Merriman adds. “We know that not everyone can travel or donate money, but if everyone can do whatever they can to help, it would make a huge difference.”

With its rich cultural relevancy, Merriman and Brochu urge readers everywhere to take advantage of the book’s free availability from October 27th to the 29th.

The book can be accessed here: http://amzn.to/U74AfK

To find out more about the book, as well as African Aid programs that could use donations, please visit The Leopard Tree’s official website: http://www.theleopardtree.com

Merriman and Brochu can also be found blogging at http://digitalbookstalk.wordpress.com and http://heartfeltassociates.wordpress.com

About the Authors
Lisa Brochu and Tim Merriman have spent the last four decades helping people connect with our global natural and cultural heritage in a variety of ways. Through their books and speaking engagements, they hope to help others to know more and do more about the daily challenges in meeting basic needs that face tens of millions of people in developing nations.

When they are not traveling the globe, Tim and Lisa live in Fort Collins, Colorado, on a small farm where they raise much of their own food. 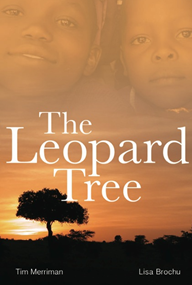