The Libertarian's Blog Presents Itself With a Completely New Look

For decades, Keynesianism and so-called Progressivism have re-shaped the world to the state it is in today: crushing national debts, rising unemployment numbers, a diminishing middle class, misdirected egalitarianism, perpetual entitlement thinking, cancerously spreading bureaucracies, intrusive Government rules and regulations, crony-capitalism, ceaseless assaults on individual liberty, moral relativism, quasi-religious environmental alarmism, PC-driven propagation of spineless tolerance towards fascist ideologies that threaten the very foundations of Western Enlightenment, have eroded the free societies we once had the privilege to live in.

The principles of Self-Ownership and Self-Responsibility (libertarianism) are being denounced and replaced by Communal Ownership and Social Responsibility; supra-national organizations assume power and legislative rights that violate national constitutions and laws; a nexus of financial and economic interests on the one side, and governmental institutions on the other render democratic processes meaningless.

Founded in 2011, “The Libertarian” offers reports and opinions on social and political issues from a libertarian perspective, without owing allegiance to any one particular party or interest group.

Philosophically rooted in the teachings of the great thinkers of the Western Enlightenment, “The Libertarian” aims to contribute to a return of public debate to the values of Reason and individual Liberty, and to unmask those that employ so-called political “correctness” for their own, anti-liberty agendas.

The site recently underwent a complete revamp to provide visitors with a more user-friendly experience and additional detailed content.

“The Libertarian” will expand over time. The site plans to add pages with information about great libertarian thinkers, famous quotes, libertarian book reviews and recommendations, libertarian apparel and much more.

About The Libertarian
The Libertarian’s founder is a happily married father of two who has – as a self-employed professional – lived and worked on three different continents and four different countries. Having witnessed and experienced ever-progressive encroachments on life and individual liberties, he has vowed not to remain part of the silent, suffering majority. 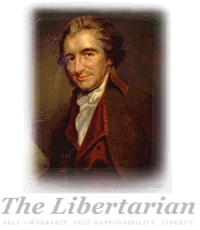