The Mentalist Code and the Search for Red John: New Book Reveals Hidden Codes and Secrets from Popular TV Show

Written by psychology professor David Daniel, this entertaining and intricate book is a celebration of the genius of ‘The Mentalist’ creator Bruno Heller, and an unravelling of the system of secret codes that were hidden ‘in plain sight’.

A fan of the TV series from day one, Daniel quickly figured out the secrets and clues planted by creator Bruno Heller, but kept quiet out of respect for the show’s fans and its masterminds. After ‘The Mentalist’ revealed the identity of Red John during a rousing mid-season episode, Daniel knew it was time to break his silence.

With the release of ‘The Mentalist and The Search for Red John’, Daniel details how he knew the identity of Red John from the first season, and further, how he grasped the system of secret codes planted throughout the series by Heller.

“I’m a professor of psychology, so the show was highly interesting to me,” says the author. “When I realized I’d ‘figured it out’, I began to write down my discoveries in the hope that someday, I’d be able to share them with the show’s other fans. I’d also love to chat with Bruno Heller and discuss his fascinating clues – I detail over 100 of them throughout the book. Obviously, Heller assumed someone, someday would crack the code – and I have.”

Finally, it can be revealed.

The author waited to expose all the secrets until the public "reveal" of Red John so as not to ruin the suspense of the show. This collector's item is about a secret set of codes hidden in The Mentalist that revealed the secret identity of Red John years before he was revealed to the TV audience.

Beautifully illustrated, this book contains dozens of secrets and clues that fans missed, and over a dozen secret codes that have revealed Red John's identity from the first two episodes. Now, for the first time, you can see how the genius, Bruno Heller, encoded these secrets into The Mentalist, and how it took a genius to decode it all. It took a real-life mentalist to decode The Mentalist. The Mentalist is a moral tale with allusions to William Blake and his poems The Tyger and The Lamb. This book that gives the Mentalist fan a look at the symbolic relationship between Patrick Jane and Red John.

Never has a TV series been so rich in codes and secrets and symbolism and never has a book been so full of surprises for the fans of a show. This book will remind you why you love The Mentalist, but it will give you a great number of new reasons why you will now even more appreciate The Mentalist.

As the author knows, millions of fans around the world are emotionally and mentally invested in the show, and its outcome.

“This book will provide a way for fans to relive the excitement they experienced through watching the characters,” says Daniel. “It’s a collector’s item and I believe it will become a cherished piece of the show’s history.”

‘The Mentalist Code and The Search for Red John’ is available now: http://amzn.to/1g1vDO0

About David Daniel
The author is a psychology professor. He has made discoveries in number theory and has developed new ways to do algebra. He has had intense observational skills all his life. For example, by third grade he recognized, by looking at a globe and a map, that the continents had drifted apart and that Da Vinci had a woman in The Last Supper. By sixth grade, he had discovered new methods for factoring and doing algebra. He has assisted law enforcement in homicide and sex offender cases and discovered patterns in several serial killer cases. 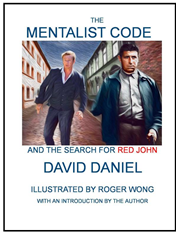