Masterfully crafted in a unique collaboration led by author Dennis Spain, ‘The Mind of God’ spawns a new literary genre that sees 821 museum-quality images fused with a gripping story about war, inspired by the poetry of the Sufi mystic Jalaluddin Rumi. Exclusively released in eBook format, the volume provokes deep thought about the nation’s continuing over-militarization of the war on terror, and asks all women to call a halt to the violence being perpetrated by men.

Kamuela, HI -- (SBWIRE) -- 10/03/2014 -- During a “walking meditation” workshop on the Big Island of Hawaii, Dennis Spain did more than just ponder life; he mentally outlined a fascinating and illuminating story that would see one young Muslim woman triumphantly walk the path to enlightenment. Spain spent over a year completing the screenplay, before transposing the story into a wholly-unique graphic novel that has been making waves since it was published last year.

However, ‘The Mind of God’ is no ordinary graphic novel, it is the first in the world to meld museum-quality art with a bold storyline to match. The combined effect leads to an insightful journey that will help any reader question the ongoing battle between ideology, religion, military conflict, and spiritual transcendence.

A graphic novel of an unprecedented 821 fine art images married to a compelling storyline. Like the swirling dance of the Dervish, the musical compositions of a young Muslim woman propel us from the war-torn landscape of the Middle East to the 13th Century tableaux of the encounter of Rumi with his teacher, Shams of Tabriz. The path of the heroine leads to her enlightenment and ours, as the war within us is faced and transformed.

“Everything about the story transcends fiction to call the real world into question,” explains Spain, who collaborated with award-winning artist Natalie Marino. “The truth is that our strategy for fighting the war on terror is killing innocents and creating more terrorists, which only ensures that the conflict will continue for decades, if not centuries. The nation state form of governance is the real terrorist, and our current military strategy is a sure-fire path to leaving the United States and its allies both financially and morally bankrupt.”

Continuing, “The key lies in the women of the world; who need to stand up to the men causing the violence. It’s not an easy task, but our book depicts a similar situation and shows how it can be done. It was inspired by some of the greatest minds in history, making this a true worlds-first.”

Ayreeh Limon Domingo comments, “It illuminates the truth about political struggle for power using ideology and religion as tool. The author depicted each event with subtlety while the illustrations are beautifully done by Ms. Marino making the book worth reading.”

The book will be of particular interest to art critics, due to the unique style of graphic novel that Spain and Marino have conceived.

With its popularity increasing, interested readers are urged to purchase their copies as soon as possible.

‘The Mind of God’, published by Carousel Productions, is available now in eBook format, and by special arrangement with the author, in a hardbound art edition with 100# glossy paper with four over four color printing, or any other desired format:

About Natalie Marino
The author lives on the Big Island of Hawaii, where he practices acupuncture and Chinese herbal medicine, and also teaches mathematics to students of all ages. In 2001, after watching the fall of the Twin Towers, he began to question seriously his beliefs concerning politics, economics, and the purpose of government. An in-depth study of libertarian political philosophy and Austrian school economics has occupied the past few years, along with an interest in political blogging.

Natalie Marino is an award-winning New Jersey/New York City artist. She has exhibited in museums, galleries and corporations throughout the United States and Europe. Her work is in diverse collections including the Korean Soo Bahk Do Headquarters and the New Jersey Department of Aging. She has won many grants and fellowships, and works with urban youth in providing art education. 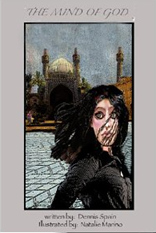