The Modern Science of Getting Rich? New Book Uses 'Law of Attraction' to Help Anyone Attract Money Through Proven Step-by-Step System

Written by Kerry O'Hallaron ‘Money Miracles: A Proven System to Attract Money and the Things it Buys’ brings Wallace D. Wattles’ ‘The Science of Getting Rich’ into the twenty-first century, exposing how the Law of Attraction can be repeatedly deployed for financial gain. The book’s claims are bold but extremely plausible; follow O'Hallaron’s system and money will simply flow.

Tampa, FL -- (SBWIRE) -- 07/18/2014 -- In 1910, Wallace D. Wattles shook the personal finance and even religious worlds with his release of ‘The Science of Getting Rich’. While embraced by millions yet shunned as a fraud by others, Wattles’ work is still in print over hundred years later – even though it is now outdated and comparatively unrealistic. Wanting to offer the world a twenty-first century alternative that fuses Wattles’ New Thought Movement philosophy with a practical and incredibly simple roadmap to wealth, Kerry O'Hallaron is delighted to announce his new book.

‘Money Miracles: A Proven System to Attract Money and the Things it Buys’ equips readers with everything they need to use the ‘Law of Attraction’ for financial gain. While it may sound just too easy – it is; showcasing a step-by-step system to attracting more money that readers simply have to follow.

What if everything they've told you about how to make money and get the things you want is wrong?!

What if “getting ahead” financially were not only easy, but fun?

What if attracting any amount of money were as simple as following a formula; and what if the formula did not work, and you could go back and repeat the process, learning and correcting what you had done wrong?

What if you learned that most financially successful people throughout history got that way by knowing these questions were true, and by following the aforementioned “formula?”

What if spiritual, business, and financial leaders since the beginning of time have tried to share this information, and we simply haven't listened?

In this important new work, Kerry O'Hallaron explores each of these questions and more. He lays out his findings in an easy-to-read, humorous and uplifting format, without departing from the book's premise.

Can the above questions be true? You decide. Many have, long before O'Hallaron's time. He simply brings us a modern interpretation of a timeless classic.

Read, enjoy, and employ the important teachings as you learn an elegantly simple approach to enjoying new streams of income and the many things you can buy when you have money!

“The Law of Attraction explains why some always seem to have money, run successful businesses, win competitions and generally experience what many would see as good luck. Equally, it is responsible for those who seem to work increasingly harder only to find life bearing them less fruit,” explains O'Hallaron. “There’s debate over whether the Law of Attraction is a metaphysical concept, a thought-process or even a natural phenomenon. Either way, it exists for people to positively exploit.”

Continuing, “My book explains everything a reader needs to do to embrace this omnipresent concept and make more money. It’s proven and just simply works; it’s now up to each individual to decide if it’s something they want to do. I think Wattles would be proud as I’ve paid real homage to and expanded upon his original work, while injecting my own strategy that aligns perfectly with the modern world.”

‘Money Miracles: A Proven System to Attract Money and the Things it Buys’ is available now: http://amzn.to/1n6ZUyl.

About Kerry O’Hallaron
For over thirty years, Kerry O’Hallaron has been a self-proclaimed student, teacher, and practitioner of self-actualization, which he describes as “the art and science of achieving more with the talents you’ve been given.”

The focus of his trainings has been on improving one’s financial situation, whether by excelling at a career, launching a successful enterprise, or profiting online.

His first publishing effort, entitled “Public Speaking Gold Mine,” sold thousands of copies in various editions and media before gravitating to Kindle on Amazon.

In 2013, he read the book “The Science of Getting Rich” by Wallace D. Wattles. He describes the book as both a timeless classic and hopelessly outdated. However, he was struck by the fact that the core teachings of the book greatly resembled the same core teachings of modern self-improvement teachers who taught principles of attracting money. As the book was in the public domain, he decided to rewrite it in more modern language, incorporating some of his own time-tested teachings and experiences into his text, which is entitled, “Money Miracles.” “Money Miracles” is currently available on Amazon in print and Kindle formats, and will soon be available in audio format.

O’Hallaron was born and raised in St. Louis, MO and now lives with his wife near Tampa, FL. 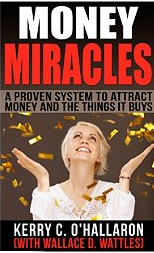