The Movie, the Woman in Gold, and E. Randol Schoenberg on Making Life Brighter Radio

Phoenix, AZ -- (SBWIRE) -- 07/29/2015 -- On Monday July 27th, 2015, Winifred Adams discusses Feature Film, Woman in Gold, based upon the true story of E. Randol Shoenberg, who sued the country of Austria and won in order to reunite the rightful owner of a 135 million dollar Klimt painting, after it was stolen by the Nazis. http://www.makinglifebrighter.com/radio on the Health and Wellness Channel on Voiceamerica.com

E. Randol Shoenberg sits down with Winifred for a candid and informative interview, discussing the true-life, behind-the-scenes details of the case and the movie.

E. Randol Schoenberg, the grandson of the composers Arnold Schoenberg and Eric Zeisl and the winner of numerous awards in the field of litigation, is an expert in handling cases involving looted art and the recovery of property stolen by the Nazi authorities during the Holocaust. Among his most prominent cases is that of "Republic of Austria v. Altmann" which resulted in the successful return of five paintings by Gustav Klimt, including the "Woman in Gold," to their rightful owner. Schoenberg graduated from Princeton University with a Bachelor of Arts in Mathematics and a certificate in European Cultural Studies and received his Juris Doctor degree from the University of Southern California.

2007, Mr. Schoenberg received the California Lawyer Attorney of the Year award for outstanding achievement in the field of litigation. Mr. Schoenberg has served as President of Los Angeles Museum of the Holocaust since 2005. http://lamoth.org/

He serves on the board of the Los Angeles Opera, the Los Angeles Museum of the Holocaust, Sinai Akiba Academy, Southwest Chamber Music Society, JewishGen, Choral Society of Southern California, and the L.A. Jewish Symphony. 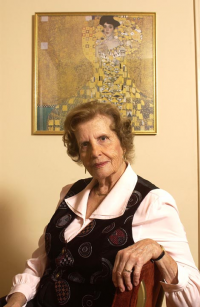