The Much Buzzed About Film, "The Toy Soldiers", Rolls out on Kickstarter

The eerily topical teen movie which has been getting tremendous attention from industry, goes to crowd sourcing with some incredible rewards for contributors.

Hollywood, CA -- (SBWIRE) -- 06/24/2013 -- Hollywood, CA: Riding Hood Motion Pictures is proud to announce that pre-production has begun on their newest picture, The Toy Soldiers, from the award winning writer and director, Erik Peter Carlson. "On one evening in a decade of sex, drugs and rock 'n' roll, the innocence of youth and family unravels,” says Carlson.

Even though the fictitious film takes place in the 80's, the themes are surprisingly familiar and current. One can’t help to notice parallels between the narrative and real life tragedies such as the story of Rehtaeh Parsons, the bullied Canadian teenager, or the horror of Sandy Hook Elementary. “This stuff pains me. I think about it every day,” Carlson explains.

Even with the film funded, the producers are reaching out to their massively loyal fan base for additional contributions with the crowd funding web site, Kickstarter. "Our goal is extremely modest at $6,500. This may not sound like a lot, but on a small indie film, this can make a huge difference. It will allow additional shooting days, studio rentals and on and on. I feel there will be people out there who will want to be a part of this movie because they feel as passionate about its subject matter as I do,” he says.

Contributors to the ‘The Toy Soldiers’ Kickstarter campaign will be offered some exciting rewards from signed scripts and posters to an opportunity to be in the film itself.

The film will be shot on location in southern California this summer. Some amazing Hollywood talents have already been attached to the film, including Constance Brenneman (Love and Other Drugs), Kevin Pinassi (from Carlson’s last film, Transatlantic Coffee) and an exciting, fresh talent, Megan Hensley. 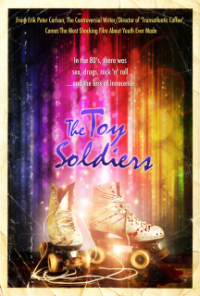