'The Notorious Guys' Now, on iTunes

Bereldange, Luxembourg -- (SBWIRE) -- 01/26/2014 -- ‘The Notorious Guys’, the first feature film by Adolf El Assal, a film director and producer from Luxembourg, is a roller coaster ride that movie lovers are going to enjoy right till the very end. The story is very relatable as it is about a group of youngsters who are on their way to discovering a new land while also engaging in some nerve wracking action.

The movie follows the classic ‘in a pickle notion’ as the script depicts the over enthusiasm of a group of boys who find themselves in great trouble in their effort to explore the romantic country of Portugal. The story centers on the life of Steven who is the main character, how he deals with sudden turn of events and how he and his group manage to seek help from a hopeless companion which results in an interesting story that is entertaining and engaging.

Another thing which is interesting about this movie is that the script has been churned out after a great deal of effort from the director who also happens to be one of the producers and writers. The film took form after five years of commitment and dedication towards improving the script and making it movie ready. So, for those who want to indulge in hard core comedy also keeping in touch with other sentiments can watch the movie and enjoy.

This flick is a complete popcorn movie and it’s based on his award-winning short film THE NOTORIOUS ROAD…, meaning it is involving through and through. There is not a single moment of boredom in the movie. And, now that this movie is available on iTunes US and Canada is great news for movie fans all over the world. Movie watchers can simply pay and download the movie instantly. To know more about the ‘Notorious Guys’ and to read the preview, log onto the below mentioned link.

About Adolf El Assal
Adolf EL ASSAL was born in Alexandria, Egypt before moving to Luxembourg at the age of 7. He graduated in filmmaking from Kingston University in the UK and is a Berlinale Talentcampus Alumni as well as a EAVE graduate. He is the co-founder of Independent Spirit Productions, a Luxembourg-based film production and distribution company that focuses mainly on developing and producing high quality short and feature films for a local as well as an international audience. Ady has recently completed his first feature film THE NOTORIOUS GUYS. 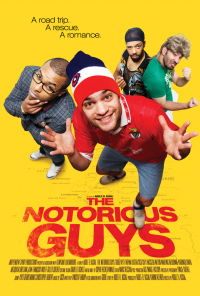