The Other Side: An Alternate Perspective of the Faeries, Mermaids, Old Souls and Starpeople Training to Be Human in Volume Three of Michelle Gordon's 'Earth Angel' Series

Following the runaway success of ‘The Earth Angel Training Academy’ and ‘The Earth Angel Awakening’, Gordon’s latest instalment continues the saga of the Earth Angels – tasked with Awakening humans before they destroy Earth. While it started as a simple project in 2009 inspired by the National Novel Writing Month (NaNoWriMo), the series has since grown to resonate with readers around the world.

Herefordshire, UK -- (SBWIRE) -- 11/01/2013 -- While many authors put pen to paper as a hobby, UK author Michelle Gordon confidently admits that it’s her entire reason for living. With such strong passion, it is no surprise that her ‘Earth Angel’ series of books has rapidly garnered a dedicated following and is showing all the hallmarks of becoming a classic. Two years after the release of ‘The Earth Angel Training Academy’, Gordon is delighted to announce book three, titled, ‘The Other Side’.

The latest volume continues the theme of Earth Angels – souls who were once Angels, Faeries, Mermaids and Starpeople who left their realms to attend the Earth Angel Training Academy and learn how to become human. When they are called to be born on Earth, each Earth Angel’s mission is to initiate the global spiritual Awakening.

Synopsis of ‘The Other Side’:

Mikey is an ordinary boy who just happens to talk to the Faeries at the bottom of his garden. So when an Angel visits him in his dream and tells him he must return to the Earth Angel Training Academy in order to save the world, despite his fears, he understands and accepts the task.

Starlight is the Angel of Destiny. By carefully orchestrating events at the Academy and on Earth, she can make sure that everything works out the way that it should, even though it may not make sense to those around her.

Leon is a Faerie Seer. He arrives at the Academy as a trainee, but through his visions he realises that his role in the Awakening is far more important than he ever imagined.

The Other Side takes the first Earth Angel Training Academy story and helps you to see it from a completely different perspective.

As the author explains, for her, the NaNoWriMo structure has produced amazing results.

“It allows me to simply start with an idea and then almost witness the book writing itself. Words flow onto the page as I get caught up in the lives of my characters, their realms and their missions. That’s why I confidently believe that I was born to write,” says Gordon.

Continuing, “I also want to help others. Though fictional, many readers have identified with the books, and they have helped them to realise their purpose here on Earth. My reason for writing this series is to reach out to other Earth Angels and to help them to remember who they really are.”

Volumes one and two have attracted a string of rave reviews. For example, Eric Charles spoke very highly of ‘The Earth Angel Training Academy’; “This book changed my life. In the pages of this enchanting novel Michelle lays out a great tale full of charming characters and gripping drama. She introduces us to lovable characters: fairies, leprechauns, old souls, elders, and much more. Before I read The Earth Angel Training Academy I never knew life was so full of wonder and playfulness.”

With the book expected to be in high demand, interested readers are urged to purchase their copy of ‘The Other Side’ immediately upon its 13th November Release.

Volumes one and two of the ‘Earth Angels’ series are currently available on Amazon: http://viewauthor.at/michellegordon

About Michelle Gordon
Michelle Gordon is an Old Soul writer on a spiritual journey to help others to Awaken to their purpose in this life. Michelle started writing poetry at the age of eight or nine, and wrote hundreds of poems and short stories until the age of 16 when she wrote her novella - Heaven Dot Com. After that she didn't write anything much for about eight years, having decided that it would be better to get a 'real' job, rather than try to get published. Several 'real' jobs later, Michelle wrote her first full length Visionary Fiction novel: The Earth Angel Training Academy.

It took two years to get around to editing it and publishing it, but finally, on the 1st July 2011, she published and launched it at the Heart of the Dragon Festival in West Wales. Michelle then wrote and published her mini non-fiction book - Choose Your Own Reality - in just one day. The next novel published was The Doorway to PAM which was released on the 1st December 2011. In July 2012, Michelle published The Earth Angel Awakening (sequel to The Earth Angel Training Academy) and she also created three Oracle Card decks to go with the Earth Angel books. In December 2012, Michelle released her fourth novel, called The Elphite. The Other Side is her latest novel, and is the third book in the Earth Angel series. It will be released on the 13th November 2013. 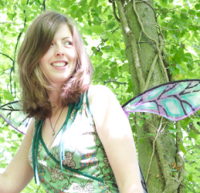